The ups and downs of online polls in student elections 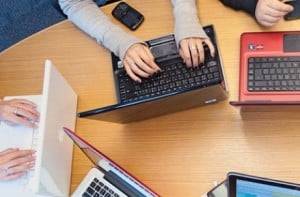 Sarah Petz, a reporter with the Manitoban student newspaper, is disappointed that so few of her fellow students bothered to vote in last month’s University of Manitoba Students’ Union election. “At seven per cent,” she says, “the result is not very representative.” It’s not that there weren’t clear differences between candidates. There were. The Manitoban uploaded candidate interviews to YouTube and shared them on Twitter. It wrote about issues from printer breakdowns to the construction delays on the opening of the first campus pub. And yet, despite it all, only 1,900 of the 26,000 eligible students exercised their right to decide who will run the $1-million organization for the next year-long term.

But just because Petz was disappointed, don’t assume she was surprised. “Beyond a small group of highly active students,” she says, “no one seems to care.” Turnout is often low at the U of M. It’s not much better at the University of Toronto, where only 10 per cent of students voted this year, and worse at York University where turnout was just five per cent in 2011. But low voter turnout isn’t inevitable. Not anymore. At McMaster University, where students receive ballots in their campus inboxes that they can fill out on iPads, laptops or smartphones, turnout hit 33 per cent this year. That’s up from 24 per cent last year, 22 per cent the year before and much higher than the 13 per cent turnout in 2009, back before they ditched paper and pens.

The University of Windsor Students’ Alliance (UWSA) had an even more impressive result this year: 42 per cent filled out ballots online. That’s almost as high as the turnout in the city of Windsor’s last election. It’s in striking distance of the 49 per cent turnout in Ontario’s last vote, too. Jordan Renaud, chief returning officer of the UWSA, attributes the result partly to his efforts to get out the vote, partly to a bus pass referendum that sparked high levels of interest, but most of all to the convenience of online voting. It couldn’t have been the bus pass question alone, he says. A similar question was voted on in 2006, back when they still used paper ballots exclusively. Nineteen per cent voted then and that was considered exceptional.

Curious about turnout on your campus? Click on our interactive graphic.

Web voting has also boosted participation at the University of Western Ontario, Brock University and Simon Fraser University. So much so that it’s a wonder every student union hasn’t made the switch. Turns out there are plenty of reasons to hesitate. Exhibit A is Keith Horwood, a 23-year-old Western alumnus who says he hacked into his alma mater’s student council election in February and briefly changed a candidate’s name to “Justin Bieber’s Haircut” and the title of the page to the “University Erection.” The student council had to dump 10,000 votes and start over, at a cost of $14,087.

Horwood, who faces criminal charges, apologized in a YouTube video and said that he was only messing around. “My brain just exploded,” he says in the video, referring to when he first realized the security flaw. “It was like somebody had just put the world’s coolest toy or the world’s most attractive woman in front of me and they were like, stay away,” he says. “And you know what? I couldn’t.”

While Horwood didn’t appear to alter vote totals, someone at the University of British Columbia seems to have done just that. While the polls were open in 2010, 731 votes came in, one after another, from a single IP address. The student society called in forensic auditor Dean Krenz. It didn’t take long for him to find a security flaw. People could log in, clone the vote page and submit fake ballots.

Someone had apparently done so 731 times and, in one race, for seats on the Senate, those “suspect votes” cost someone their win. They were cast mostly for three people, including then-computer science student Nader Beyzaei, who had taken one of the seats. Five other candidates, including Alyssa Koehn, received none of the fake votes. After the “suspect votes” were removed, it turned out Koehn had won. Beyzaei stepped down. Unsurprisingly, students’ confidence in UBC’s Web-based system was damaged.

Confidence was similarly shaken last year at Queen’s University after alumni received Web ballots, while some eligible students received emails saying they weren’t on the voters’ list. The technical flaws are all too much for Sean Finn, chief electoral officer at the Carleton University Students’ Association. He decided to overrule council earlier this year after they told him to switch over to online polling in time for the spring vote. Finn examined the options carefully and decided he was only comfortable with the paper-based system. He built ballot boxes with scrutineers present and had campus police lock up the papers at night.

It’s not that Finn doesn’t believe online voting could be good for Carleton’s student democracy, he says. “I just don’t see how it’s viable yet.”