Foreign students were staring down 10 per cent fee hike 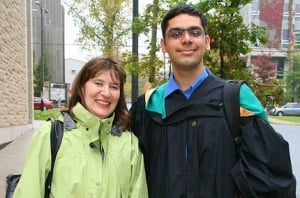 International students at Dalhousie University have been spared a 10 per cent hike to their already-expensive tuition fees.

Could governments finally be defending the students who bring so much money into Canada?

Dalhousie had proposed a seven per cent hike in differential fees, on top of the regular three per cent increase for all students, which would have meant a 10 per cent hike for internationals.

That was rejected by the Nova Scotia government in favour of an increase of 3.5 per cent in differentials, or 6.5 per cent in total. Currently, international students pay $3,630 more per term (or $7,260 more per school year) than Canadian students.

Dalhousie officials said they had requested the larger increase to support improved services for international students, including more advisors and workshops. Carolyn Waters, vice president academic, told the Chronicle Herald that more services are necessary because the number of international students at Dalhousie has grown by 85 per cent since 2008.

They now make up 10 per cent of the total student population.

“[International students] might have to go back to their own country or shift to another university,” Meela Auaduer, a second year student from Malaysia, who penned one of the letters, told the CBC.

The differential fees are meant to reflect the fact that governments provide much of the funding for domestic students. (Click to see how much of your tuition bill is covered by the government.)

But the students are all very good for Canada’s economy. A report from Foreign Affairs and International Trade showed that there were 178,000 international students studying in Canada, who produced $6.5-billion for the economy in 2008. $291 million went directly into government coffers. In total, international students created economic activity that sustained 83,000 Canadian jobs.

Other student groups will be pleased with Nova Scotia’s decision. “The term that’s being used here a lot on campus [for international students] is ‘cash cows,'” Aisyah Abdakahar, a former vice-president for the University of Manitoba Students Union, told the Winnipeg Free Press.