Fred Penner came back, the very next decade 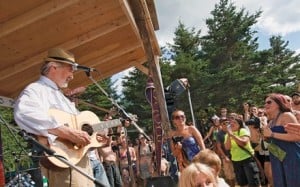 Emily Slofstra, 24, is one-fourth of the Tra La Las, a band of Wilfrid Laurier University graduates who sing about the environment, income inequality and police brutality. “One of our songs is called Harper is the Root of All Evil, if that gives you any indication,” says the Occupy supporter, who grows her own veggies on an urban farm.

The Tra La Las attend plenty of shows in Kitchener-Waterloo, Ont. But without exaggeration, Slofstra says 65-year-old children’s entertainer Fred Penner gave one of the best.

Like so many twentysomething Canadians, she grew up singing along to hits like Sandwiches and The Cat Came Back. Now the man who crawled through the log on CBC’s Fred Penner’s Place each weekday from 1985 to 1997 has made a comeback by playing for people who heartily embrace his messages of sharing and environmental respect.

Penner, on the phone from his home in Winnipeg, admits he was a “little bit lost” in the decade after the TV series ended. He played children’s festivals and gave keynote speeches for educators while “hoping for the next big thing to come along.” Then emails started arriving from college-aged kids, asking things like, “Do you still have the log? Do you still have the Word Bird?”

He suspected the generation he once sang to on the TV screen might want to reconnect. Penner played his first show for university students in Gerts Bar at Montreal’s McGill University in 2008, just as the clouds of the global financial crisis were forming.

“When I finally came around the corner there was this collective rave of ‘Freeed Pennnner!’ I remember looking out at this generation and every single person was smiling and pouring out this incredible energy toward me. It was a love-in. A love-fest.”

Penner has since played pubs from the Wave at the University of Prince Edward Island to Felicita’s at the University of Victoria to the Lazy Owl at the University of Regina. While fans say nostalgia is the main draw, the messages he offers certainly resonate. “I talk about how we’ve been seduced by this world of credit, ” he says. “It can’t be easy for the young people coming up, trying to figure out where their lives are going economically, spiritually and even morally.”

Penner takes his cue from folk singers like James Taylor, Bob Dylan and Joan Baez, who inspired him as a young adult. “The folk singers were protesting against the establishment, against the man, against the war,” he says. “As a collective group, you made your voices heard. Nowadays, it’s not the same. We’ve lost that purpose.”

Slofstra and her friends are the exception. Many of the folks who pushed their way to the front of the crowd at the Chainsaw in Waterloo last year were activists in one way or another. There were graduate students studying migrant workers, indigenous rights and the environment, plus some who’d been arrested protesting at Toronto’s infamous G20 meeting in 2010. “I think maybe that shows something,” she adds. “The fact that my friend group was listening to Fred Penner might have informed who we became as adults.”

Not everyone sees the shows as political. Jon Millington, 23, attended the UPEI gig in October and said the highlight was Puff the Magic Dragon. While he recognized the hippie roots, he says Penner wasn’t pushing a message. Candice Heigh, 24, was brought to tears at the UPEI show. “He said something like whenever he sees all these people here at his show, he knows the world’s going to be okay. That was really profound for me.” Heigh had graduated with a B.A. in psychology a few months earlier and was struggling to find a full-time job. After seeing Penner, “You think, ‘wow,’ there are so many things in the world that you can do!’ ”

Penner might suggest starting with income equality, labour rights or the environment. After all, he’s hopeful this generation will change the world. Until then, he plans to continue on the university circuit, entertaining and educating. “Maybe I should be a university professor,” he says, half-joking. “I have toyed with the thought.”

See also: A Fred Penner fan, all grown up