Have you heard? Free speech is a thing of the past. And religious liberty is dying fast.

It began last week when Arun Smith, a seventh-year human rights student at Carleton University in Ottawa, tore down a “free speech wall” on campus because it featured socially conservative comments. The action inspired three National Post columns and an Ezra Levant exclusive lamenting the end of freedom of expression as we know it. 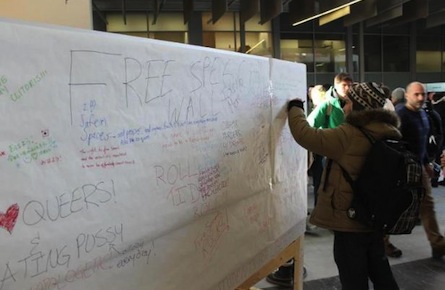 Elsewhere, on the religious liberty front, the Canadian Council of Law Deans wrote a letter of protest to Canada’s Federation of Law Societies about Trinity Western University. The Christian liberal arts school in British Columbia wants to open a law school that would require students to sign a Community Covenant Agreement that pledges “Healthy Sexuality.” The agreement has nothing to do with gonorrhea or how to avoid it: what’s to be avoided is love and sex between people of the same gender (which is, I guess, by Trinity Western’s standards, worse than gonorrhea). “Sexual intimacy,” says the covenant, “is reserved for marriage between one man and one woman.” In other words, gays need not apply.

In a bizarre twist, one of Trinity Western’s champions is the British Columbia Civil Liberties Association, whose double-speak on this issue would confound George Orwell himself. From the Vancouver Sun:

Lyster’s concern, I suspect, is the same kind shared by Rex Murphy and Ezra Levant when they lament the end of free speech at Carleton University. There’s no denying most secular liberal arts schools are left-leaning, but do they really “impose restrictions on free thought and religious perspectives” draconian enough to match the injustice of Trinity Western’s ban on homosexuality?

Secular schools are by and large socially liberal, yes, but the mere presence of seventh-year human rights students and atheist professors in blue jeans does not equal discriminatory policy against socially conservative, religious students. Nor does the overwhelming presence of socially liberal thought prohibit social conservatism. Telling gays they are going to hell probably won’t make you valedictorian, but there is no rule against doing so. Arun Smith ripped down the “free speech wall” because written on it, among other things, was “Traditional marriage is awesome,” and “Abortion is murder.” He was wrong to do so. But the fact remains: he was punished. The students who wrote the conservative comments were not. As for the free speech wall? There is a new one in its place.

Socially conservative students may find that in a modern university classroom, they’re uncomfortable stating their views on the civil rights of gays and lesbians (possibly that they shouldn’t have any), but that doesn’t mean they’re not allowed to. However, your right to speak freely doesn’t negate someone else’s right to tell you to stop talking. And asking that you do so because your argument has no place in an institution of higher learning, or in a court of law (my right to marry my girlfriend is no longer a valid debate topic, nor is it any of your business) is not a letter of expulsion.

Echoing the British Columbia Civil Liberties Association, Barbara Kay writes in the National Post that secular law schools are breeding grounds of their own a-religious philosophies; prone to different but equal prejudice. Here she is below:

“So although white Christian students of European descent don’t actually have to sign a Covenant attesting to their original sin of white or male privilege when they sign up for law school, they may as well have had to, considering what they will be taught once they’re in, and the way they’ll be treated if they dissent from the critical race theory or feminist line. Unlike gays, who have their pick of law schools that cater to minority sensibilities, those who reject the Marxist-based faith governing most law schools in the West are forced to submit to their tenets.”

Let’s assume for a moment Kay is correct: Canadian law school is a three-year pinko party to which all would-be gay law students aspire. And one at which all socially conservative law students feel out of place.

That she can even allude to the isolation of socially conservative students on secular campuses proves my point precisely. They are allowed on secular campuses. They don’t have to sign a covenant. They may not Take Back the Night, or Occupy Bay Street, but nobody’s stopping them from going to school. More on point, their rights to rant and lobby against my rights does not bar them from enrolling in a secular institution. But my right to be myself would bar me from enrolling in theirs.

So let’s be clear. We are not dealing with equal prejudices. One is far more insidious. Secular law schools, no matter how annoyingly liberal, do not have the power to expel socially conservative, religious students simply because they are socially conservative and religious. Trinity Western University’s law school, on the other hand, would have the power to expel gays because they are gay.

Social conservatives of this ilk are not defenders of liberty. They are its thieves.