What students are talking about today (April 4th) 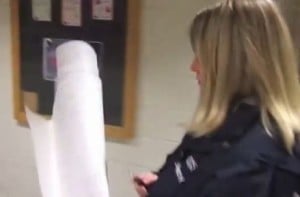 1. Queen’s University instructed security officers to rip down a free speech wall in a student centre because it “allegedly included language that constituted hate speech,” according to an official press release. A video of a blonde-haired officer removing the banner has been widely-viewed on YouTube. The wall, little more than paper with words scribbled on it, was encouraged by the Justice Centre for Constitutional Freedoms and erected by the local group Queen’s Students for Liberty. What exactly was so offensive is unclear, but it was bad enough that the administration chose to act. “Queen’s recognizes the right of free speech, but appreciates too the limits on free speech. Hate speech and racial slurs have no place on our campus,” wrote Alan Harrison, Provost and Vice-Principal (Academic) in the statement. The Alma Mater Society, which owns the space, put out a statement too. “Queen’s Students for Liberty was given an opportunity to remove these two denigrating comments, and return the space to one of inclusive, free dialogue for all,” wrote president Doug Johnson. “When the club failed to act, the offensive material was removed.” A free speech wall erected at Carleton University in January was torn down by a student who claimed it was anti-gay.

2. Speaking of free speech and hate speech, students at Towson University in Maryland are fighting back against a white supremacist group’s declaration that it will start “night patrols” on campus. At a student-organized rally, the university’s president praised efforts to peacefully oppose the White Student Union. Matt Heimbach, spokesman of white group, told ABC News he believes multiculturalism is being forced on America. Yes, this is really happening in 2013.

3. Stephen Toope, president of the University of British Columbia, annouced Wednesday that he will step down in 2014 and then he gave an interview to The Ubyssey student newspaper. Heather Munroe-Blum, principal of the equally well-respected McGill University, who is also stepping down, did an exit interview of sorts with campus media too. The differences between the questions student reporters asked are a reminder of the contrast between generally sunny UBC students and the almost endlessly antagonistic McGill crowd. McGill student reporters asked questions like, “How can McGill say that it’s part of Quebec, and, at the same time, call tuition fees sacred?” and “Do you think [the police] could have had different tactics?” Meanwhile, at UBC, The Ubyssey reporter asked Toope questions like, “Do you think raising UBC to a global level is one of your core achievements?” For the record, I think it’s obvious that both Toope and Munroe-Blum have been strong leaders.

4. Bill Clinton told reporters ahead of a meeting with student leaders that he sees the cost of college as a major problem. “We can’t continue to see the cost of education go up every decade when wages are flat,” he told Inside Higher Education. “I think the only sustainable answer is to find a less expensive delivery system,” he added, saying the next step is, “for someone to certify what you need to know and then figure out some way of validating the merits of these online courses.”

5. The University of Calgary Dinos sports teams have unveiled a new logo, which is, obviously, a dinosaur. More interesting is that Calgary also announced a five-year partnership that will put Nike swooshes on uniforms. Speaking of corporate sponsorship deals, the Petro Canada Hall at Memorial University in Newfoundland has been renamed for Suncor Energy, which donated $50,000, reports The Muse student newspaper. There once was a time when there would be major outcries against corporate sponsorship deals on campus. Apparently that’s no longer the case.