From Quiet Revolution to not-so-quiet riot 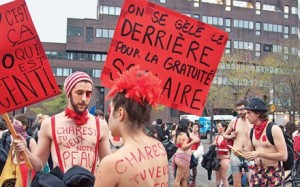 For more than 12 weeks, tens of thousands of Quebec students have taken to the streets in anger and frustration. They’ve hurled slogans from worn-out vocal cords, sung and danced and taken their clothes off. Protesters threw stones, smashed windows and clashed with riot police, all in an effort to halt the government’s proposal to increase tuition $1,625 over the next five to seven years.

Students began walking out on their classes in February. More than three months later, the dispute has become the longest student strike in Quebec history. The stubborn persistence of the strike has left many in the rest of Canada scratching their heads over why there’s been such uproar. Even in Quebec, the intensity of the protests has puzzled observers.

“The whole political and media class has been taken by surprise,” says Eric Pineault, a sociologist at the Université de Quebec à Montréal (UQAM). Quebecers currently enjoy the lowest tuition in the country. And never mind that with Premier Jean Charest’s proposed hike, the average tuition in Quebec would then be the second-lowest in Canada. Yet more than 165,000 students are on strike indefinitely. Many of them will lose their semester if they don’t head back to class soon. How did the movement attain such strength and longevity?

The answer lies largely with a particular thrust in Quebec society that links ideals of social democracy—such as widely affordable university education—to a sense of national identity. These ties date back to the Quiet Revolution of the 1960s, a time when Quebecers became maîtres, or masters, of their own province, instituting changes that gave Quebec a more left-leaning bent than elsewhere in North America.

“The Quiet Revolution is a very important moment in Quebec history,” says André Pratte, editor of Montreal’s La Presse newspaper. “Every time someone questions the decisions that were made at the time, it’s almost as if you are trying to destroy a very important part of that moment.”

The era spawned the Parent report, a document that created the province’s tuition-free colleges (called CEGEPs) and founded its network of universities. At the core of the report lay a dedication to make post-secondary education free for all Quebecers.

In the years since, as tuition fees gradually climbed in English Canada and the United States, Quebec students have repeatedly taken to the streets to defend the spirit of the Parent report. “Our parents and our grandparents fought for it,” says Fédération étudiante universitaire du Québec (FEUQ) president Martine Desjardins. “We are very proud of this.”

Even so, as the strike drags on, many might wonder why the parents of protesting Quebecers haven’t been more vocal about the conflict. Shouldn’t they be upset that their kids might lose a semester, especially if they’re footing the bill? It might be because the amount of money on the line is so insignificant; indeed, many Quebec students are completely self-sufficient. But parental tolerance for the lengthy strike also reflects a culture of student protests that spans generations. Just as they took to the streets to protest in decades past, now many of them see it as the duty of their children to do the same.

Still, there’s no question something is different about the intensity of these protests, says Pierre Martin, a professor of political science at the Université de Montréal. Charest’s proposal isn’t a mere tweak to an old system, he says. It’s an unprecedented departure from the model outlined in the Parent report, a system founded in the image of low-tuition Scandinavia, France and Germany.The changes will make it more expensive. More North American.

“This is why students are protesting right now, to preserve this accessibility that we’ve been talking about for years,” says Desjardins, a 30-year-old Ph.D. student at UQÀM. “They’re doing this for the next generation.”

Just hours before rubber bullets and makeshift projectiles filled the air in Victoriaville, Que., on May 4, where student leaders met with the government to hammer out a tentative and largely futile agreement to end the strike, a gaggle of Quebec leftists packed into a daylight-soaked rotunda at UQÀM’s Pavillon Judith-Jasmin. University and CEGEP professors from across Quebec sat at a long table to declare their support for the strike. Sitting at the centre, in the place of honour, was Guy Rocher, the 88-year-old educational rights advocate who co-authored the Parent report. To his left sat 21-year-old Gabriel Nadeau-Dubois, the charismatic spokesperson for CLASSE (Coalition large de l’association pour une solidarité syndicale étudiante), the most radical of the main student organizations.

Applause rained from the balconies above as Rocher enthusiastically endorsed the student demonstrators. The old hero of the Quebec left smiled softly and turned to Nadeau-Dubois, as if to pass the ideological torch to a new generation. Nadeau-Dubois spoke passionately of delivering the promise of his forebears. University education is a right that must be defended, he declared, punctuating each phrase with an emphatic jab of his forefinger on the surface of the table. The applause he received was just as thunderous as Rocher’s.

Nadeau-Dubois and his organization, with their anti-capitalist rhetoric and ties to the environmental movement, have risen in prominence since the beginning of the strike. Many student assemblies have switched allegiance to the group, abandoning more moderate and exclusively student-focused organizations. It now represents nearly 100,000 of the striking students—a solid majority.

Fearing they may lose even more supporters, the moderate student unions have dug in their heels much longer than they did in 2005, when they negotiated a deal with Charest after a smaller, 52-day strike over changes to loans and bursaries. The moderate organizations are “really careful not to be seen as the ones who make an unacceptable compromise with the government,” says Pratte.

Out in the streets of Montreal, where hundreds have turned out for nightly demonstrations in recent weeks, protests have taken on an air of frivolity. Demonstrators congregated each night at the Parc Émilie-Gamlin before embarking on rambling marches across the city. On one particular night hundreds turned up outside Charest’s Montreal residence, and at the home of Mayor Gérald Tremblay, where a thin line of riot police guarded the lawn as demonstrators fired Roman candles into the air and belted chants demanding “sex, amour, gratuités scholaires” (sex, love, free schooling).

On May 3, protesters incorporated a new theme to their nightly march, eschewing most of their clothes. “We needed to find new methods to shock and bother people without the use of violence,” explains Eric Chalut, 23, wearing nothing but a thong. Many marching with him had the protest movement’s symbolic red squares—representing antipathy to student debt—painted over their nipples and butt cheeks. Others covered themselves with little else than underwear, a jock strap or a single sock. They carried beer cans and draped their arms over each other’s shoulders, while the odd skunky cloud of smoke indicated another joint of marijuana had been lit. “The students have shown a determination that’s rare in the history of social movements,” says Antoine Bouchard, 20, a history student at UQÀM. “We have nothing left to lose. We will keep going until the very end.”

That end could be on the horizon. The student movement is showing cracks. Several CEGEPs voted to go back to class last week, while a poll published in La Presse found that 68 per cent of Quebecers support the government’s plan to raise tuition.

There is also an increasingly vocal group of students intent on saving their winter semester, whether the dispute is resolved or not. Sixteen students at the Montreal’s Collège de Maisonneuve, for example, obtained a court injunction recently that allows them to attend class during the strike. Anthony Guay, a 19-year-old computer science and math student, says he was booed and taunted by hundreds of protesters as he went back to school last week. “We were royally insulted,” he says. “We were called names and squarely intimated.”

But he didn’t let it get to him. Instead, while the strike forced him out of class for months, Guay taught himself to make iPhone applications. He now plans to start his own company—regardless of whether his classmates stay in the street, or come back to school.