From student politics to Speaker of the House 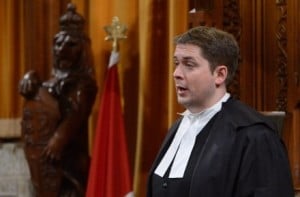 The 2013 Maclean’s University Rankings asked some of Canada’s most successful writers, politicians and scientists what they wish they’d known in university. Their answers are perfect additions to our First Year Survivor blog. Here’s advice from Andrew Scheer, the 33-year-old Member of Parliament for Regina—Qu’Appelle and Speaker of the House of Commons.

I always had an interest in politics, so I took several political science courses while pursuing a history degree at the University of  Ottawa. I moved to Regina to get married (my wife had moved back home there), and I took my last few credits at the University of Regina.

I really enjoyed first year. In university you get to meet hundreds of other young people with similar passions. Solving the world’s problems in the campus pub, volunteering during provincial or federal elections and participating in student associations were not only fun, but very educational.

I lived at home and worked part-time as a waiter to pay the tuition, so it was a difficult balance. When I think back to how much I crammed into a week, it amazes me how little sleep I would get and still function.

I spent two weeks in 1999 driving all over Ontario volunteering during the provincial election with several other students. That taught me so much about grassroots organization.

I had several great professors who really brought history to life. I can’t say there was a single experience that had a profound effect, but I think the cumulative experience changed the way I thought and gave me a much deeper appreciation for learning. I still have moments when I am struggling with a problem, and some words of wisdom from a professor will pop back into my mind and I’ll completely change the way I was looking at the situation.

Looking back, I think I would tell myself to stay in better contact with people I went to school with. I wish I had stayed closer with some of the friends that I had in first year. If you don’t invest a little time, you end up drifting apart.