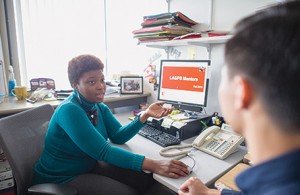 Shari-Ann Baker, who was born and raised in Jamaica, moved to Toronto in 2010 to attend York University. Her first assignment was an essay for a Canadian studies course. Baker got a B, a mark she was able to improve after learning about the school’s Writing Centre: Her next assignment, for a sociology course, received an A. York’s various facilities, programs and clubs, such as the Community of United Jamaicans, were invaluable in helping her get settled. “People say you’ll get worse grades than in high school,” says Baker, now 22, in her fourth year of a linguistics degree. “If you take advantage of resources on campus, I don’t think it’s a problem.”

First year is a precarious time, fraught with new challenges and responsibilities—both academic and personal. Suddenly, “the world sees you as an adult,” says Barry Townshend, manager of the Centre for New Students at the University of Guelph. “A lot of responsibility comes with that,” from getting to class on time to paying rent, not to mention choosing an academic direction that will help with a future career. It’s a lot of pressure, all at once. Universities are increasingly finding a way to support students through this transition with writing centres, advisers, academic coaches and mentors.

At Cape Breton University, every new student reports to the First-Year Advising Centre, where they meet with an academic adviser to pick their courses, an upper-year student to help plan their timetable and an “academic coach,” who gives them tips on time management, goal-setting and other skills. (The academic coaching program was introduced last fall.) The coach also puts them in touch with a student ambassador, an upper-year student who can field future questions. “That was really one of the things students said relieved their stress,” says Tammy Byrne, the centre coordinator. “They left with contacts of three or four people.” Coaches periodically send emails checking in, and students are encouraged to contact them for help. At Dalhousie University, too, trained “student success coaches” check in by phone or in person. “We want to try to catch them before they’re faced with challenges,” rather than after they’ve missed a deadline or exam, says Quenta Adams, director of advising and access services.

At the University of British Columbia’s Okanagan campus, staff noticed that first-years from outside the region—just 27 per cent of the student body comes from the B.C. interior—were leaving the university in greater numbers than their peers. So UBC Okanagan introduced Kick Start, which aims to familiarize them with campus life in August, before orientation week begins. Participants go biking, kayaking, or to the beach; they tour campus, meet with academic advisers and get settled. (Participants were limited to 60 this year, a number that should double by next.) A similar program, Jump Start, is offered to international students, and runs at both UBC’s Okanagan and Vancouver campuses.

At a small school like Mount Allison University, in Sackville N.B., it’s hard to get lost. With a tight-knit student body of just 2,600, the student-to-faculty ratio is 17 to one. “If you want anonymity, don’t come here,” jokes Ron Byrne, vice-president of international and student affairs. “It’s unlikely you’ll go to the supermarket or a local restaurant and not see someone you know.” At the start of first semester, town residents welcome new students with a corn boil. Hundreds attend. “The research is very clear,” Byrne says. “The sooner students make connections, the sooner they feel at home, get settled and focus on the business of being students.”

Big universities are emulating that small-school feeling. At UBC, as of May 2012, each student on the Vancouver campus is paired with an “enrolment service professional” who is also a financial aid officer, and the student follows him or her “from the moment he or she accepts the offer through to graduation,” says Darran Fernandez, associate director of enrolment services. This person is the student’s first point of contact for applying for a loan, getting academic help after failing a midterm—even figuring out strategies to deal with a troublesome roommate, thus simplifying the counselling process.

Meanwhile, Carleton University has seen success with ArtsOne, a program designed to provide a “small school” experience. Groups of 30 students take courses together, including a first-year seminar. They’re put in touch with services such as the library, the writing centre and former ArtsOne students who are “peer helpers.” In a survey at the end of the last academic year, 95 per cent said they felt supported by instructors, and 94 per cent said they’d recommend ArtsOne.

Choosing courses can be stressful, especially because new students are prone to change their minds. At the University of Manitoba, students can enter directly into a faculty—or into University 1, where they build a timetable that spans more than one program, exploring different interests. “You’re not directly tied to a degree program,” says Bonnie Hallman, executive director of student academic success, who oversees the school’s University 1 First Year Centre. Instead, “you’re taking courses that will get you into one or more programs.” Say a student is interested in science, engineering, environmental science and maybe nursing. “We can build a curriculum that will get you into any one of those,” she says, which gives the student time to acclimatize to campus life and figure out a major. U of M also offers Arts 1110, a credit course called Intro to University, designed specifically to help students transition from high school. Open to any undergraduate student in her or his first or second year of study, it hones skills such as academic writing and critical thinking.

For marginalized groups, adjustment to university life can be especially intense. At Guelph, a leader in supporting its first-year students, “the fastest-growing population are students with mental-health issues,” says Bruno Mancini, director of counselling and disability services. With new funding from the Ontario government, the school is in the process of developing a credit course for first-year students with diagnosed mental-health problems, to be offered next fall. “We don’t want it to be a therapy course,” Mancini says. “It’s going to be academic.” (Guelph already offers a similar course for students with learning disabilities.) The credit component is an incentive, he explains. “We have a lot of support groups, but they’re hit-and-miss. If you have an academic credit, it creates expectation and adds a whole new dimension of accountability. And it works.”

Raven Hart, who belongs to both Manitoba’s Nisichawayasihk Cree Nation and Minnesota’s White Earth Band of Chippewa, found herself feeling “out of place” when she arrived at the University of Winnipeg, where about 10 per cent of the student population is First Nations. “Aboriginal students need strong spiritual support,” she says. Hart, who’s in her second year, found it at the Aboriginal Student Services Centre, where students are offered a dedicated adviser. The school offers a transition-year program for first-year Aboriginal students, including tutoring based on their individual needs, and access to elders who are on campus four days per week. Hart, who was in the transition-year program, is now the female representative on the Aboriginal Student Council. “The university has really created opportunities for us to get engaged in our culture,” she says, which has encouraged her, in turn, to complete her studies there.

As for York University linguistics student Shari-Ann Baker, she’s now a coach guide—a peer mentor to students who’ve been away for a year or more and have returned to finish their degrees. She advises them on everything from how to manage a crammed schedule to where to find help with their next big assignments. She’s glad to pass on the skills she’s learned. Her best advice is “to be open to change, and to be engaged.” After all, universities are dedicating more resources than ever to first-year students—but students still need to reach out and take advantage of them.