Frosh week fun? Not for everyone.

Tips from a student who couldn't wait for orientation to end 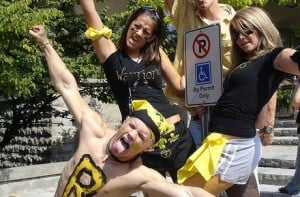 This time last year I was nervously anticipating orientation, also known as frosh week or “Week of Welcome” here at the University of Alberta.

I thought that the first week would be an accurate indication of how life would be over the next few years. I was wrong and I’m glad about that, because while there were parts of orientation I enjoyed, I honestly couldn’t wait for it to be over.

Here are five reasons my welcome week sucked and what I wish universities would do instead.

1: Quit it with the blaring house music!

Before my first day of school, I’d never heard Party Rock Anthem before. That changed fast. At first it wasn’t that bad, but after LMFAO announced that “Party Rock was in the house tonight” in almost every building I set foot in, I nearly lost it. Hearing that song over and over again was especially inconvenient when I was trying to talk to people I’d just met, or concentrate on academic stuff.

For the sake of we non-party-rockers, why not keep the club atmosphere all in one area?

2: Cheer-leading lessons? I’d rather not.

A campus tour, a trip to the bookstore and workshops on study habits—that’s what I expected. Instead I was taught four separate Arts Faculty cheers before the first day’s lunch. It’s not that I wasn’t excited to learn about a tradition my entire faculty shared, but my time could have been used better. Oh, and for the record, I never heard any faculty cheers after the first week of school.

What I could have used instead was a more thorough tour of this gigantic campus.

3: Beer on a school night? No thanks.

When I first turned 18, I spent an entire week drinking. Luckily, the novelty wore off. Being hungover for all of my early morning classes taught me self-control… the hard way.

But not everyone has learned their lesson and too many learn it in frosh week. Why not encourage students to only party on the weekends and leave the weekdays for serious stuff?

My favorite thing about orientation week was the clubs fair. That’s how I learned about the campus newspaper, without which I wouldn’t even be writing this post. But it almost didn’t happen. I had only 15 minutes to spend at the clubs fair before my orientation group left. Since they took us to the fair so late in the second day, I had no time to go back and spend time considering other clubs.

Instead of drawn-out, isolated ice-breakers within orientation groups, there should be more time fore useful things like the clubs fair where you meet people you may actually see again.

5: Enough with the boring speeches!

I know this a tradition, but my school’s “president’s address” was too long. What should have been one speech was actually ten. Most of the two-hour event was just corny jokes. I didn’t even hear much of it because of two ladies snoring beside me. There should only be one speech: a short one.

There you have it: five things that made my transition from high-school to university more difficult than it needed to be. I hope orientation planners will take my advice. Rather than making students feel nervous, bored or tired, a welcome week should make students feel, well, welcome.

That said, if you’re a freshman, don’t worry too much. You’re not alone, not everyone is a party rocker, and I guarantee you that university is nothing like orientation week. It’s much better!