What students are talking about today (March 26th) 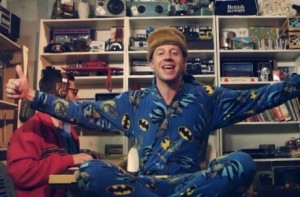 1. The Seattle rapper Macklemore, known for his mega-hit Thrift Shop, in which he rhymes about the deals at Value Village and raiding your grandparents’ closets, has made cheap clothing stores fashionable. In Calgary, local bars recently hosted a ‘Value Village’ formal and one graduate of SAIT who opened a consignment shop told The Weal student newspaper that it’s now a cool business to be in. The thrift shop phenomenon was also explored in The Athenaeum.

2. A Simon Fraser University sorority, Kappa Beta Gamma, has caused outrage by naming a pub night “G.I. Joes and Army Hoes.” Gloria Mellesmoen, writing in The Peak student newspaper isn’t happy that women are labelled “hoes.” She argues the theme is wrong too. “War should not be glorified or sexualized. I highly doubt anyone who has had to fight for their country would appreciate their work being represented as a sexy costume by a bunch of drunk university students.” She goes on to add, “I can say with the utmost confidence that I will never join a group that would call its membership and supporters ‘hoes.'”

3. A woman was sexually assaulted while she slept on a Greyhound bus bound for Ottawa Monday. Ottawa Police say the woman awoke to find a stranger sexually touching her and started screaming for fellow passengers to come help. An international engineering student was later acquitted of all charges.*

4. A young women was a victim of sexism from Conservative Minister Keith Ashfield, at least according to some bloggers, because Ashfield told her she would “make a wonderful wife for somebody.” After the outrage online, NDP MP Megan Leslie brought it up in the House of Commons. Now, the woman involved is speaking out. “In regards to what [the] Honourable Keith Ashfield said, I feel that it was a compliment,” she wrote on Facebook. “On the day that he visited, our family welcomed him as our guest and treated him with Filipino hospitality. I personally made him a Filipino bread called ‘Ensaymada’. He complimented me on the bread, and I appreciated the thanks. I was not offended whatsoever and it is unfair that the Minister’s comment was taken out of context.”

5. Did the Babe films, with their cute porker protagonists, turn you against meat? It seems that’s what happened to one of the human actors in the film. James Cromwell pleaded no contest to disrupting a University of Wisconsin System Board of Regents meeting last month to protest cat experiments at the school. He and a 27-year-old student held large signs showing a cat with metal implanted in its head at a campus lab while shouting about the treatment of felines, reports Huffington Post.