Gender-neutral washrooms are the way to go 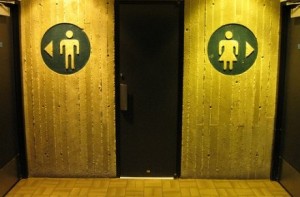 If you want evidence that universities are places where basic assumptions are questioned, check out this story about students in Regina and Winnipeg pushing for gender-neutral washrooms.

The point of such gender-neutral facilities is to provide a place for those who do not fit neatly into the normal divisions of male and female. If this seems confusing, consider the case of an old undergraduate buddy of mine who I will call “Andy.” Andy was, genetically speaking, female, but had her hair cropped short and liked to sport a Greek fisherman hat with a men’s shirt and jeans. She was tall and fit and if you were just passing by her on the street you would be hard-pressed to fit her into the usual categories of men and women. That, of course, was sort of the point. Once, a mean-spirited store-owner mistook her for an effeminate man: “You look like a girl,” he sneered.

Now imagine someone like Andy trying to choose a washroom on your campus and you may have a better sense of why gender-neutral makes sense. Some people may get nasty looks—or worse—no matter which binary category they choose.

A number of Canadian universities already have gender-neutral washrooms. Western, Victoria, and McGill, according to reports, all have at least some. My own august institution, Cape Breton University, converted some existing male-female washrooms a few years ago, at the urging of the Student Union’s sexual diversity coordinator and the faculty association’s equity officer, Kate Krug.

According to Krug, the administration was not initially enthusiastic about the idea, but came around when it was suggested that they had a duty to accommodate students for whom the regular washrooms were insufficient. Administration, it turns out, has a different view. CBU’s Communications and PR Director says: “no one recalls any opposition or controversy.”

Controversial or not, the male/female washroom division is one of those things that few seem to question until someone points out that there are, in fact, big questions to be asked. We are so used to the distinction that it seems not just obvious, but inevitable. That is, until you find out that guy you always thought was a guy isn’t. And maybe isn’t a girl either. But still really needs to pee.