Do you know where your student fees are going?

Most student unions aren't transparent about your cash 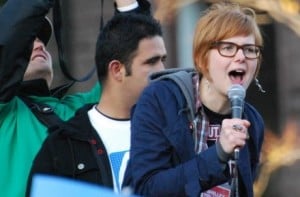 Students are often outraged when they do find out—often in their fourth year—that they’ve paid dozens of fees to causes they don’t support.

That’s why students at the University of Alberta recently offered a presentation called “Students’ Union Fees Used to Spread Hate,” during which the speakers argued that many students are unwittingly paying mandatory fees that go to the Alberta Public Interest Research Group, which supports the always-controversial—they say hateful—Israeli Apartheid Week (IAW).

Proponents of these types of fees, like this Gateway columnist, often argue that students can opt-out of such fees in the first few weeks of school. Tough luck if you didn’t find out in time, they say.

But even where such opt-outs exist (and they don’t everywhere) students often find it difficult to even know what fees they’re paying—never mind that they fund things like Israeli Apartheid Week.

For some particularly egregious examples, read “They spent it on what?!” by Sarah Boesveld.

Consider my experience. Students at Ryerson University in Toronto will vote next week over whether to add a new mandatory $10.35 fee to support a campus radio station, after the old one was shut down. I wanted to know how the new fee would compare to other fees collected by the Ryerson Student’s Union, but the info wasn’t on their website. Their customer service line operator told me that, “maybe, it’s on the website?” and then put me on hold. Eventually, I was able to determine, using the school’s financial planner, that the total amount of current fees for full-time undergrads (including a $295 health plan) amounts to $469.63. But the breakdown isn’t there.

That made me wonder: How hard is it for students to find out what they’re paying? And so, I did an experiment with all 45 English schools in the Maclean’s Universities Rankings. Here’s what I found.

Only 16 student unions—35 per cent—put a breakdown of fees on their websites.

But of the 29 student unions (65 per cent of the total) whose fees breakdowns aren’t easily found on their websites, only four of them so much as bothered to answer my e-mail query that was sent to their info-line or communications person, asking for a list of fees. St. Thomas, UBC, and McGill all pointed me to alternate locations for fees online. Dalhousie’s spokesperson said they publish them in student agendas, not online, but typed up the stats for me. That’s not ideal, but it’s in good faith.

But what about the other 25 unions? Is it acceptable that 56 per cent of student unions didn’t share a basic fee breakdown? To me, it seems rather hypocritical that student unions won’t readily display or share this information, considering how uniformly opposed to high tuition fees they all are. When it comes to their own fees, why are student unions so opaque? I have one theory:

Perhaps more students would ask to opt out of fees—if only they knew where the money is going.

*Queen’s University’s AMS was originally omitted from the list of schools with a clear and transparent breakdown on their list. Maclean’s On Campus regrets the error.