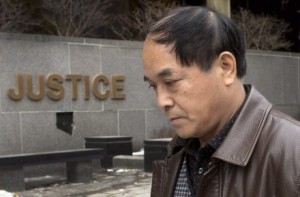 A Chinese father left a courtroom in tears after hearing evidence at the preliminary inquiry of Luka Magnotta, who is accused of killing and dismembering his son.

Overcome with emotion, Daran Lin left the courtroom helped by his translator and lawyer Tuesday, trembling and weeping, and he did not return.

A lawyer for the family said the grieving father of Jun Lin had been given a general idea of things he might hear at the preliminary inquiry.

But it proved to be too much for the elder Lin.

“He decided to take the afternoon off,” said Daniel Urbas, a Montreal commercial-litigation lawyer who is acting pro-bono as the family’s attorney.

“He’s gone back to be with his wife and his daughter.”

The Lin family has made the trip to Canada, at considerable cost, in order to honour their relative’s memory and follow the legal proceedings.

Daran Lin has represented the family at the hearing — his wife and their daughter have not been present. His lawyer said he might manage to return to court later in the week.

“It’s important for him to honour his son, to witness how our judicial system works,” Urbas said.

“He’s trusted our society with his son once. And he wants to see whether, and how, he can trust our society with the judicial process that’s going to lead to the resolution of the criminal charges in his son’s death.”

The preliminary hearing for Magnotta began with testimony from police witnesses.

The Ontario native showed no emotion as the case against him was presented, quietly listening to the testimony with his arms folded. An interpreter has been stationed near him to translate French-language testimony into English.

The hearing is subject to a publication ban on the evidence being presented.

However, members of the public and media are allowed to attend.

A unique attempt by the defence to have the courtroom closed was rejected Tuesday. Quebec court Judge Lori-Renee Weitzman denied a defence motion aimed at having the public and the media barred.

The hearing will determine whether there is enough evidence to send Magnotta to trial for the murder of Jun Lin, a Chinese engineering student. At least three weeks have been set aside for the preliminary phase.

The first witness to take the stand at the preliminary hearing Tuesday was the lead investigator in the case. Michel Bourque, a Montreal police major crimes investigator, was the primary detective in the case against Magnotta.

In addition to first-degree murder, Magnotta is charged with committing an indignity to a body; publishing obscene material; criminally harassing Prime Minister Stephen Harper and other members of Parliament; and mailing obscene and indecent material.

Lin’s family thanked the media for giving them space as they attended the court hearings. Urbas said they appreciated the respect and dignity afforded them.

Urbas himself approached the family soon after the crime occurred. He said his role is simple — to provide explanations about the process and offer any assistance they need.

Urbas is a commercial lawyer by trade, but his firm often engages in pro-bono work.

“We’ve done it in the past,” Urbas said.

“We simply put ourselves in their place: What would we want for someone in their country if we were in the same situation?”