Has the Canadian Federation of Students lost its way? 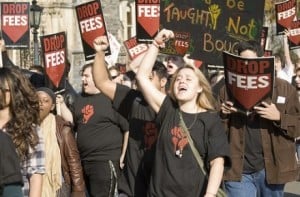 What do the War of 1812, the Israel-Gaza conflict and bottled water have in common? They are causes the Canadian Federation of Students (CFS) decided, on the closing evening of the semi-annual general meeting (AGM), to campaign about. How odd for organization that’s supposed to be focused on student issues.

During that Nov. 30 meeting in Ottawa, the CFS voted to organize letter-writing campaigns against the Harper government’s representation of 1812 and its opposition to Palestine’s observer status at the United Nations. This came after hours of debate on transparency and openness—two areas the CFS would do well to improve on. Some of the measures that would improve openness and transparency were, unfortunately, rejected.

The Canadian Federation of Students, funded by mandatory student fees from dozens of universities and colleges, is meant to represent students on issues like tuition. The fact that these non-student (albeit important) issues take up so much of their time shows the CFS may have lost its way. Worse, students may have no idea what the CFS is up to because it seems to fear transparency.

I was the only student journalist reporting on the meeting. Although other student reporters requested access, I was left to “live Tweet” all by myself. It took a Herculean effort just to get in. When the Canadian University Press, where I am Ottawa Bureau Chief, first asked for access to the plenaries, we were told it was closed to reporters. We would only be allowed in the workshops.

It took a board meeting just to allow me in. This seems wrong, considering students fund the organization and I am a student journalist. (At least they allowed me to attend eventually.)

At the meeting, the executive listed off many impressive past campaigns and lobbying efforts.

But one of those campaigns didn’t sit well with me. Their push to ban bottled water is supposed to force schools to provide higher quality water fountains and make students use reusable bottles, thereby helping the environment. In practice, as a student at the University of Ottawa, it just deprives me of water and forces me to purchase carbonated diabetes-in-a-bottle instead.

Unfortunately, those issues went unnoticed, and CFS members across the country will continue to celebrate Water Bottle Free Day and the newly added World Water Day next year.

While the majority approved of bottled water campaigns, the majority also fought tooth and nail against some proposals that would allow for more transparency: writing a comprehensive history of the organization, releasing information about lawsuits from member units trying to leave the CFS, and recording in the published minutes how local representatives voted at the AGMs.

What dumbfounded me the most was rejecting the motion to write a detailed history. During the debate, excellent points were brought up about learning from one’s mistakes. One speaker pointed out there are lots of negative things written about the CFS but not many positive ones. Sure, a history would show failures, but it would also show successes, and those can be pretty cool.

Why was the motion voted down? Resources should go to campaigns instead, opponents said.

And who has time for transparency and history when there’s bottled water to fight?

I don’t think CFS is a bad organization. A lot of the work the CFS does, like fighting against discrimination and standing up for student rights, is admirable and successful. But they are too distracted by political causes that have little to do with their core mission.

It’s also hypocritical to demand government accountability, as they often do, while discouraging media scrutiny and after voting against measures to improve openness.

What is the CFS afraid of? Unlike some people, I don’t believe there’s a conspiracy or something that the CFS is trying to cover up. But when the CFS isn’t open about its operations, it makes the student-funded organization seem closed off and unaccountable to students.