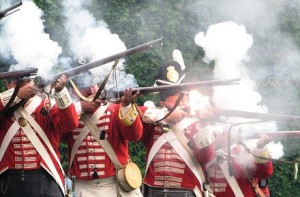 Recent history grads may be forgiven for not knowing the significance of the 1st Baron of Dorchester, or that his 1774* Quebec Act was once known as Canada’s Magna Carta. They don’t teach much pre-Confederation history in school. “In high school, we had to take one history course and all I learned about was World War One, World War Two—maybe we touched on the Depression,” says Amy Legate-Wolfe, the 22-year-old co-president of the University of Toronto’s History Students’ Association. She didn’t choose any Canadian history courses in university either, preferring to learn about British monarchs and the origins of Hong Kong.

But considering that the Quebec Act was the first piece of legislation to enshrine minority rights for French Catholics in the British Empire, more Canadians should have studied it, says Chris Champion, one of the five editors of a new journal, the Dorchester Review. The Review’s first issue is modest in circulation (500 copies), but it has attracted some big-name contributors, including Conrad Black. They’re united by the belief that Canadian history teachers are overlooking many key moments. “[Professors] emphasize the notion that the really important things happened after John A. MacDonald, that World War One was Canada’s war of independence, that we didn’t really become a country until we had our own flag and that our rights and freedoms began in 1982 with the Charter,” says Champion. “There’s a lot more to it than that.”

The kind of things one might have learned if studying in the 1960s. The University of Toronto’s 1960-61 course calendar shows 27 of 33 history classes focused on Canada, Britain or America. Queen’s University only offered two courses on anything outside of North America or Western Europe that year.

Today, U of T’s history undergraduates, like Legate-Wolfe, are thankful for the more diverse course offerings. They’re so diverse, in fact, that students can earn a degree without having taken a single third-year course on Canada, the U.S. or Britain (though they must take at least one on Asia, Africa or the Middle East). And of the department’s 85 undergraduate lecturers, only two teach pre-Confederation Canada.

McGill University pre-Confederation historian Elsbeth Heaman has witnessed an increasing lack of interest in the period each year at the Canadian Historical Association’s annual meeting. “Older histories,” she says, “seem less politically relevant.” Indeed, a thumb through the June issue of The Canadian Historical Review reveals political essays and reviews on post-1945 Quebec, gays in 1950s America, and women’s literature of the 1930s. But of 20 articles on Canada, only two explore the period before 1850.

Jack Granatstein, in his 1999 bestseller Who Killed Canadian History?, argued that provincial curricula elevated the histories of exploited minorities, women and the working class so much that it became uncool to teach about an era when most decisions were made by upper-class English men.

Legate-Wolfe, who graduated from high school in 2007, says Canadian history classes only taught her that the pre-1867 era “was really just the U.S., Britain and France fighting over this huge piece of land, plus maybe some native cultures.” She didn’t realize she liked history until she learned about Henry VIII at university. This chance meeting with the 16th-century king of England prompted her to switch majors. Those at the Dorchester Review hope to prove pre-Confederation Canada has similarly inspiring characters.

* This has been edited to correct a typo.