How did the student standoff come to this?

Emmett Macfarlane on the sorry state of policy debate 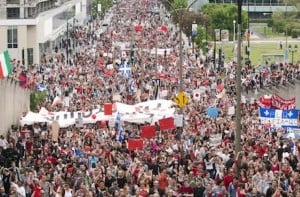 Reasoned debate is off the table. The student protesters and the Charest government are sharply at odds – in fact, they despise each other – but they’ve collaborated in one respect: each side has acted to ensure that rather than a robust public discussion about how to fund the province’s universities we get an ugly, protracted battle about the right to protest.

Why has the situation deteriorated so miserably? There is no shortage of finger-pointing on either side.

From the government’s perspective, too many protesters engaged in unacceptable tactics, including blocking non-protesting students from attending classes, vandalism, intimidation and violence. Some critics assert that the peaceful majority failed to condemn, in strong enough words, the hooliganism of those in their midst. Then, last week, classes on one campus were literally invaded, in defiance of court injunctions.

From the protesters’ perspective, the government has been obstinate, initially refusing to meet with student groups and then offering a fishy-looking compromise they quickly and roundly rejected. Peaceful, legitimate protests were often broken up by police. Then the government passed a law which, as I wrote here a few days ago, criminalizes peaceful protest in ways that are likely unconstitutional.

It is this latest decision by the Charest government that has guaranteed consecutive nights of tension, violence and arrests for the foreseeable future. By passing, in hurried and thoughtless fashion, a bill that casts its net so widely, that contains vague provisions and harsh penalties, and that does next to nothing to address the real lawlessness that supposedly necessitated it, the government has legitimated the sense of victimhood that so thoroughly saturates the rhetoric adopted by student leaders.

If much of the blame falls to the government for exacerbating the situation, the protesters – especially the student leaders – are by no means exonerated. That their response to unacceptable legislation was to label it a declaration of war was no heat-of-the-moment exaggeration. Well before the Charest government crossed the line, the movement had declared itself the “Quebec Spring,” with protesters likening themselves to revolutionaries battling a totalitarian state.

It is this mindset that impoverishes our political discourse. It is emblematic of a shift away from policy debate, political compromise and democratic deliberation. It is an attitude that infects people of all political persuasions, although it tends to be more intense among the less moderate on either side.

Some of the protesters’ critics have dismissed the entire movement as representative of a “culture of entitlement.” I think this is problematic, largely because it ignores the reasons and justifications for their legitimate position (even if I happen to disagree with them). There should be room for the policy debate, for the expression of legitimate concerns about access, equality and universality with respect to post-secondary education.

The real problem is the increasing tendency to replace policy discussion and political debate with the invocation of rights. Invoking rights is the equivalent of playing a trump card. It leaves no room for compromise. It denies the validity of other perspectives or alternatives. It reduces political discourse to the making of demands. It subjugates other values, policy ideas or arguments about the distribution of resources. It risks replacing logic and deliberation with emotion and threats.

Now, lest anyone think I’m arguing otherwise, let me state the obvious: fundamental rights are imperative for any functioning democracy. More specifically, the right to free expression and free assembly (including the right to protest) must be fiercely protected.

That said, not everything is a right. In the face of a bylaw regulating unkempt lawns, for example, it would be incorrect to claim one has a “right” to let his or her grass grow three feet tall.

Even more significantly, the fundamental rights we do enjoy also come with limits. This is a fact which almost never emerges in debates about rights. My own research has demonstrated, for example, that media coverage of Supreme Court of Canada decisions concerning the Charter of Rights often ignores the extensive analysis the Court engages in about whether rights limitations are reasonable under the law. The very first section of the Charter is a statement that the rights within are subject to reasonable limits and limitations analysis is often the core feature of Charter cases.

The problem is not that Quebec’s student protesters have asserted the right to protest. The problem is their rhetoric and actions are premised on the notion that a tuition increase constitutes an unreasonable violation of their fundamental rights. They believe their concerns about accessibility and universality override other concerns, like sustainability or quality of education.

Many of those who support the student protests will find this argument unpersuasive. They’ve pointed to the Quebec Charter of Human Rights, which includes free public education under its social and economic rights, conveniently ignoring the language of the section (“to the extent and according to the standards provided by law”).

More generally, critics’ response to my argument that the debate should not be about rights often amounts to “of course it should, unless you don’t believe in social justice.” The problem with social justice, like rights-based arguments, is that everyone favours it but have legitimate disagreements about what counts as social justice. For example, proponents of the tuition increase have pointed out that rather than functioning as a progressive policy, subsidizing tuition is in fact a regressive policy that disproportionately benefits the middle and upper classes.

Unfortunately, that policy debate has been taken off the table. Thanks in part to a foolish law passed by a government that has bungled its response to the protests from the beginning, the rights narrative dominates. And look at how productive it has been.

Emmett Macfarlane is a political scientist at the University of Victoria. You can follow him on Twitter: @EmmMacfarlane