How not to handle a frosh controversy

Reaction to SMU chant brings to mind Mao... and elephants 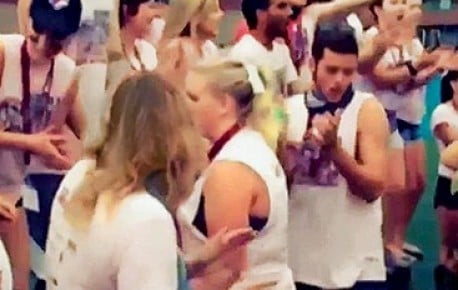 I’m not the sort of person to justify one wrong with another—well, actually I am, so stop reading now or hang in—but to invoke a hackneyed bit of rhetoric, am I the only person in Canada who thinks the frosh controversy utterly daft? Initiation rites at Halifax’s St. Mary’s University include chants. This year’s song sheet had a vulgar golden oldie that till now has barely caused a ripple. Last week the same lyrics became a tsunami, perhaps because Nova Scotia is, well, far northeast and has never heard of Miley Cyrus twerking.

If you’re not familiar with the lyrics in question, I can tell you it takes some googling. CBC’s dead-serious talking heads pronounced the words to be the end of civilization as they knew it, but daintily avoided saying them—very twee. My faith in the great Canadian people holds we have a low enough sex drive and high enough moral standard to read them without engaging in rape and pillage: “Y is for your sister, O is for oh so tight, U is for underage, N is for no consent, G for grab that ass, SMU boys we like them young.” Not uplifting reading, not Yeats and not the much-honoured poet Philip Larkin, though it brings to mind his line, “They f–k you up your mum and dad,” which, had Larkin known him, might also have included the name of Colin Dodds, the president of SMU, who, on hearing the chant, exclaimed, “What do you think I feel?” and then answered his own question with, “I feel sick to my stomach.”

Would Isaiah Berlin, the late president of Wolfson College, Oxford, even in his dimmest moments (of which I never saw one) have come close to that dismal observation? The antics of freshmen are invisible to most distinguished chancellors outside North America. But Our Man Dodds has created a “task force” to address sexual violence and Jared Perry, president of the SMU’s student association, has resigned, saying “It’s definitely the biggest mistake I’ve made . . . throughout my life.” Chalk up one more student whose primary lesson from college life will be the virtue of hypocrisy. Eighty students are going to take sensitivity training instead of actually learning to think independently and yes, the two are mutually exclusive. Well done, Dodds.

Sensitivity training is the velvet-glove equivalent of Mao Zedong’s “struggle sessions.” The wrongdoer faces his crimes and has his faults pointed out so he can self-criticize. Behavioural modification transpires. Dodds might want a supply of pointy hats and placards with “I am a sexual transgressor” on them. God knows how SMU students cope when they encounter rap music or other modern horrors. I believe Eminem has won multiple Grammys and an Academy Award for lyrics such as “You’re the kind of girl that I’d assault / And rape then figure why not try not to make your p—y wider? / F–k you with an umbrella . . . ” and so on. There it is and as far as it goes it’s utterly meaningless: sound, not thought. I’d prefer teaching students to grow intellectually rather than stunting them with trendy responses to base instincts.

What this actually reminded me of and I’m damned if I know how I got there but the mind makes peculiar jumps—rather like typing in the phrase “opera divas” in YouTube and ending up on a page showing elephants mating—which is an extraordinary thing, by the way. Lady elephants are patient mates who stand, occasionally flicking their trunks, while the male tries heaving his tonnage onto her back. When he finally gets there, his sexual organ is nowhere near the point of entry and it is poignant to watch the effort required to complete the act. Elephants are what this incident at SMU reminded me of.

The magnificent and highly intelligent elephant has always been treated abominably. Today helicopter gunships shoot them down in Africa and hack off heads for ivory tusks, leaving baby elephants orphaned. But the mental connection to SMU comes from the treatment of elephants in America at the turn of the 19th century, when they were publicly executed for their “crimes.”

Trained with hot irons and hooks, every now and then under captivity and performance strain, America’s circus elephants would kill a keeper. Instead of blaming the culture, the blame was placed on the elephant. The sentence was death and usually a public one. Six-ton Topsy, an elephant who had performed for more than 30 years, was led to her death on Coney Island in 1903, originally to be hanged before hundreds of spectators. Topsy refused to budge before she reached the scaffold so she was given a last meal of carrots and cyanide, and electrodes clamped on her feet coursed 6,600 volts through her. The docility of Topsy facing her execution was interpreted as self-awareness of her criminality, contrition and repentance—just what Dodds wants from his performing students.

SMU’s chanting freshies are the flotsam of a mainstream culture lauding contraception and abortion for underage girls, contorting gender identity and making sexual variation a protected human right. They are probably healthier in their view of sex than the constipated postwar adults of the ’50s and it is largely their elders—or students who have grown mindless and fat on a diet of moddish Doddsish victim mentality—who get so fussed by bad words. (Only some bad words: Israeli “anti-apartheid” week goes by uncensored.)

Sometimes America’s elephant executions were held in front of other elephants as “deterrence.” Elephant Columbia was strangled before 21 other elephants, including her mother. The New York Times of Nov. 9, 1907, reported that the watching animals “looked on indifferently.” Forcing Jared Perry to publicly repent may make Dodds feel good but I doubt if other students looking on will find his execution any more compelling than the watching elephants of 1907.