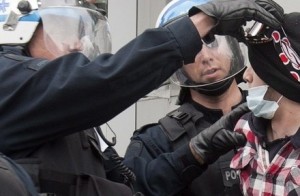 If you’ve listened to some of the commentary about Bill 78, emergency legislation purportedly designed to deal with the out-of-control student protests in Quebec, you’d assume the government has thrown a match onto a powder keg.

Some may have hoped that in the midst of its massive, ongoing failure to deal with the protests these past few months, the Charest government might finally turn the corner by passing a law to settle things down. This was sadly – though somehow not surprisingly – optimistic. Apparently no one knows how to sour a lemon like Jean Charest.

Legal experts and critics have pounced on the bill to declare, with all the subtlety of a window-smashing tuition-phobe, that it represents “mass repression” and constitutes “the worst law since the War Measures Act.” One student leader declared the bill “an act of war.” Such rhetoric is about as helpful as smoke bombs in a metro station.

Don’t get me wrong, there are some obvious Charter of Rights problems with this law. One of the worst provisions, which would have treated as guilty anyone who by “omission” or “encouragement” helps or induces a person to contravene elements of the bill, has reportedly been removed.

Another section requires anyone organizing a demonstration of more than 10 people (now amended to more than 50) in a “venue accessible to the public” to report the date, time, duration, and venue to the police at least eight hours ahead of time.

As Andrew Coyne has pointed out on Twitter, many other jurisdictions in the rest of Canada, the United States and Europe have similar reporting requirements. But these often apply to events like planned marches on public streets. Canadian courts are unlikely to find the very broad language here acceptable. Not all public demonstrations are public disruptions, nor are all publicly accessible spaces equal: it may be a reasonable restriction on freedom of assembly to require reporting and impose other limits on street protests. Imposing the same limits on demonstrations in parks or empty fields may not meet the threshold of reasonableness.

Many commentators have also expressed displeasure at the harsh fines in the bill but there’s no reason to believe the penalties themselves lack constitutionality.

Does the bill, even after amendments, overreach? Possibly. The language is too vague in some places, and a reverse-onus clause in the section dealing with the civil liability of student groups and institutions might be a problem. Does the bill compare to the War Measures Act? Not even close.

But in several important respects, the potential Charter issues aren’t the main reason this bill represents a major failure on the part of the Charest government.

First, the bill does nothing to address the lawlessness that has characterized tactics used by certain elements of the protest movement. All of these activities – flagrant defiance of court injunctions, violence, vandalism, intimidation and assault – were already illegal. The problem up until now has been a lack of enforcement, not a lack of legislation.

Second, by casting its net so wide, the bill threatens to criminalize the largely peaceful activities of a majority of the protesters. Given the current climate, this is a bad idea.

Third, the bill cancels (okay, technically it postpones) remaining classes. For people who blandly titled a bill “An Act to enable students to receive instruction from the postsecondary institutions they attend,” I think the policy geniuses in Quebec City have an inappropriate flair for irony.

Finally, the bill encourages the protesters, media and critics to continue to frame the story as the Quebec state versus the right to protest. Such a narrative provides only a partial picture of the debate and of the rights that have been trampled during this saga. The majority of students in Quebec have not joined the protests; rather, they have sought to continue their classes. They have that right, or at least they did, until the government of Quebec failed to protect it

Emmett Macfarlane is a political scientist at the University of Victoria. You can follow him on Twitter @EmmMacfarlane