How students are reacting to the strike 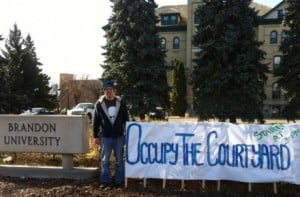 As the faculty strike at Brandon University enters its seventh week, students are frustrated. But that doesn’t mean they’ve been sitting on their hands.

For Nathan Layh, a fourth-year student in the School of Music, this is the second faculty strike that has interrupted his studies. He was there when faculty picketed for 17 days in 2008.

It’s an interruption he’s not taking lightly. Layh, along with a handful of other students, has been camped out on campus since mid-October as part of ‘Occupy the Courtyard,’ movement, hoping to raise awareness of the strike’s impact. Aside from leaving to go to work or similar obligations, Layh says five to 10 protestors have been living on the BU courtyard everyday, even in snow.

“It’s been a long month,” he said. “We didn’t expect it to go this long, we thought that both sides would see how detrimental this is to the university,” he added.

Wages have been at the centre of the Brandon University Faculty Association strike, although university officials and faculty members are not far apart in their demands anymore, with the university offering a nine per cent increase over four years, while the union has settled on 10 per cent. The main sticking point now is that the union wants $3,000 for each striking professor to make up for missed classes, while the university has only offered $1,800.

Click to read a Maclean’s On Campus opinion piece on what Brandon professors should be paid.

In a controversial move, the Manitoba government ordered striking faculty members to vote “immediately” on the university’s final contract offer. A vote could take place as early as Thursday.

At the beginning of 2008 faculty strike, Layh said he was like most students, thinking it would be a minor inconvenience. But when rumours of another strike this fall began to circulate, Layh said he was more concerned, because he knew how much he missed out on during the 2008 strike.

Instead of extending the semester after they went back to work, professors simply crammed all the missed assignments into the remaining six weeks of the semester.

This year, from the beginning, “you could feel it in the air that it was going to be messy,” he says.

That’s proved true. The Brandon University Students Union is petitioning for students to receive a full refund on their classes, but have not yet heard from the university administration about what kind of compensation they’re willing to offer students, said BUSU president Deandra Tousignant.

BUSU were initially supportive of the faculty association’s decision to strike, but are now petitioning for both parties to remove their chief negotiators, arguing that “new faces and new attitudes” are needed at the negotiation table, Tousignant said. She made it clear that BUSU council has frequently discussed their stance on the faculty strike and isn’t retracting their initial support.

For Karmen Guillas, who is studying pre-nursing at Brandon University, the strike may quash her chances of entering the nursing faculty next year. She said that she has “no idea” how she’s going to make up for the missed work in her year-long courses or if they’ll even continue.

“Even if we do get the credit,” she says, “we’re not going to learn what we’re supposed to learn. Especially for nursing, if you don’t have this primary information, you can’t move on. You’re going to be lost.”

Guillas is hoping the university will reimburse her for the classes she likely won’t be able to complete. “I don’t think we should have to pay for something that we’ve missed,” she says.

But Guillas isn’t as upset as some students. According to the Winnipeg Free Press, at least 30 students have voted with their feet. They’ve dropped BU and transferred to other schools.