How to scare the bejesus out of yourself 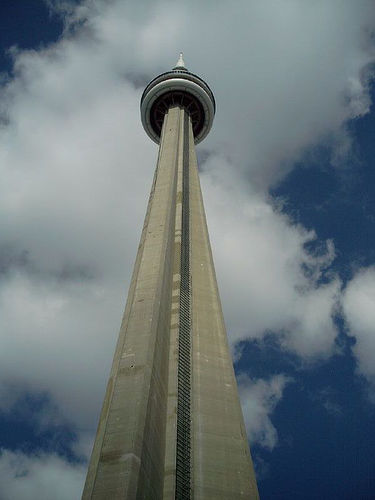 According to CBC News, the CN tower is adding a new ‘EdgeWalk’ attraction this year which will allow “thrill-seekers to stroll outside on the world-famous tower.” It opens this August and will cost $175.

The first thing I thought when I heard about this was, “Wow, they’re creating an attraction based on the ‘top ten list of things a sane person would never do.’ ” The EdgeWalk takes place on a 1.5 metre ledge that rings the main pod, more than 1,000 feet above the ground.

I’ve been trying to think of things that could actually motivate me to dangle from the CN Tower for a half hour. It’s a pretty short list:

1) At least an extra 10.2% chance that I’ll get into med school. It took me a little while to find the exact percentage, but after a series of non-existent experiments and several minutes of intense self-debate, that’s the number I came up with. Not 10.1%. Not 10.19%. Minimum 10.2% or higher.

2) A hypothetical serial killer says, “Climb up there or I’ll kill you!” And neither Daniel Craig or Harrison Ford are in the mood to rescue me.

And, uh, just for the record, my body was highjacked by a 14-year-old girl. I woke up three days later with a Team Jacob t-shirt and a tattoo of Edward on my left arm.