How to spot a Canadian

Canadians are the only nationality who, en masse, wear folk music festival T-shirts

I know that music festivals are a source of some excitement in many cities – particularly ones where the summer is made up of one month (July), in which you serve as a roaming buffet for all sorts of insect life, enthusiastically encase your pale, fleshy legs in very small shorts, and get a very bad sunburn. August, it goes without saying, is spent peeling off burnt skin, and glumly emoting that the whole month feels like a Tuesday in September.

So, for this one weekend, it’s no surprise that Calgary gets all astir. My friends in Ottawa tell me that Bluesfest feeds much the same excitement, and a friend from Guelph speaks enthusiastically of Hillside all year. It seems that folk music festivals (and their ilk) are very much a Canadian enthusiasm, and evidence of this can be seen all over the world.

We discovered this through a popular Dunn-family game while travelling. Not the one where we make up rude translations for the French news using bad accents, or the one where we add inappropriate embellishment to the cricket commentary on the radio. The one where we stereotype families and try to guess their nationality!

While visiting tourist-ridden central Italy last summer, this game became especially entertaining. After large, sleep-inducing pizzas, too tired to brave the sun, we would sit on the corner of a piazza and look out at the crowds. After spending so much time around the Italians, we had no difficulties spotting them – often wearing small white shorts, tan, and enormously fond of gold sequins, they positively glittered in the afternoon sun. The French were noticeable, I claimed, because they wore very stylish shoes, tossed their sweaters over their shoulders, and had precocious, tidy looking children. The Germans and Scandinavians both looked very blonde, their attire extremely practical, and the Brits were vigorously freckled.

My father often travels to the states, especially Texas, so he had a keen eye for spotting the Americans. He would immediately point out a gentleman – wearing a pastel coloured polo shirt, tucked into khaki shorts, with a belt. The belt, he said, was key – without this feature, the fellow could just as well be Dutch. My sister and I had no trouble spotting their daughters, for our part. In 35 degree heat, they were the only girls wearing a mini skirts and tank tops – with Ugg boots and wool Burberry scarves.

Now, a European eye might assume that there is little to distinguish the Canadian and the American families based on attire alone. However, my father never wears a belt with shorts, and our summer is much too short for us to wear wool in July. And, as we looked, our theory was proven correct. A Canadian family suddenly came into view, looking. . . very much like us.

The first hint – the father was wearing a Tilley Hat. My father was also, at that time, wearing a Tilley hat. For those who don’t know, this is a highly functional hat popular with Canadian fathers everywhere (especially those that fly fish.) It is made of a durable khaki-ish fabric, with a flat top and wide brim, and features a chin strap with adjustable toggle. This is helpful when a Canadian father wants to do anything mildly vigorous – throw a line, hike a mountain, or merely eat a picnic. On hotter days, my Dad likes to demonstrate the usefulness of the hat by dipping it in a stream or fountain, and placing it upon his bald pate, allowing water to gush from the mesh-like “easy breathing” sections like a miniature Niagara. The iconic hat also comes with a life time guarantee, ensuring that we shall not be seeing the end of it soon. (A popular testimonial tells the story of an elephant keeper, whose Tilley hat was repeatedly eaten by the animal and expelled, each time, in one piece.)

The fellow is also wearing a T-shirt, convertible MEC cargo shorts, running shoes (who else wears running shoes in Europe but Canadians?) and a MEC backpack. The mother is wearing an easy-breathing sport shirt in a cheery colour, possibly with useful pockets in strange places (armpits, lower back) that she purchased at Cost-Co (my own mother is a pioneer of this style). The kids, regardless of age, are cargo-shorted, sport-sandaled, and maple-leafed (they’re all wearing Roots), much as me, my brother and sister were at this time.
As if that wasn’t enough of an indication, the father suddenly turns around, and we are awarded a good look at the front of his T-shirt:

“CALGARY FOLK MUSIC FESTIVAL 2008,” it reads, above an illustration of a guitar wielding cow.
This seals the deal. If the location alone didn’t give it away, Canadians are the only nationality who, en masse, wear folk music festival T-shirts. I suspect there might be a few of these types in Vermont, but as it stands there are not enough of them to threaten our domination of this particular garment.

While the Calgary folk fest is a blend of cultures – Balkan fiddlers and Moroccan pipers, Thai beer and Italian hot dogs, not to mention a whole lot of hemp and didgeridoos – there’s can be no doubt for any world-weary travellers what country we’re they’ve landed in. After all, the proof is in the T-shirts! 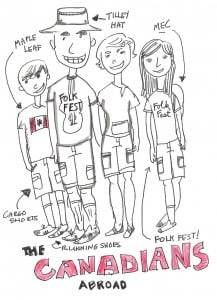