How will an 'occupation' lower tuition fees?

You're angry. We get it. Now offer some constructive ideas. 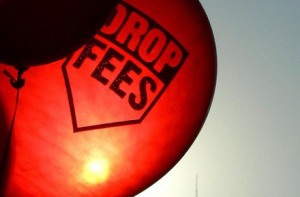 A group of students staged another pedantic tuition protest last week at the office of Glen Murray, Ontario’s Minister of Training Colleges and Universities.

The daylong “occupation,” attended by executives from Canadian Federation of Students locals, was to protest the five per cent tuition increase expected in the fall. Armed with recycled chants and glossy placards, the group of about 20 people shut down operations for the day.

To those students, I say “well done.” Yes, if your aim was to give the minister a day out of the office, or if you sought to expedite public exhaustion with student foot-stomping, you likely succeeded. I just hope you weren’t pining for actual change to Ontario’s tuition structure.

Indeed, the occupation of Murray’s office could not have come at a less persuasive time. Coverage of Quebec student tantrums is reaching its saturation point. This latest Ontario sit-in, coupled with a recent hour-long occupation of Premier Dalton McGuinty’s office, simply comes off as redundant.

Not even the provincial New Democrats, who received high pre-election marks from the Canadian Federation of Students, appear to be paying much attention. While the Liberals and NDP squabble over the budget (which requires at least two NDP votes to pass), post-secondary education has fallen to the wayside as whistle-blower protection, healthcare executive pay and income taxing at the highest levels take centre stage. Perhaps that new 30 per cent tuition rebate makes an additional piece of the pie for students a tough sell.

It’s not enough to claim that an investment in education is an investment in Ontario’s future. Recent unemployment rates for old and new grads prove that sort of thinking far too simplistic. And students can’t reasonably continue on with these hysterics in the name of “awareness.” You’re pissed off, and you think you deserve more money—great, we get it… over and over again at your tired annual Drop Fees rallies.

Now it’s time to look outside the bubble. Public school boards are poised to lay off hundreds and hospitals are trying to cope with meagre health care spending increases—all in response to a budget plan that left students’ tuition rebates intact. When put in context, it’s clear that dialogue has to evolve from “me wanna.”

Why do students deserve another break, and from where can Ontario make up the loss?  Maybe work on those question before attempting, yet again, to rhyme something with “McGuinty.”

Student leaders must offer up constructive ideas at their attention-seeking rallies  in order to be taken seriously. There was nothing of substance in the occupation’s press release. Yes, those cheers must be fantastically cathartic, but they don’t provide a launching point for serious dialogue.

These students would be wise to include links to its own comprehensive reports in its press releases, even if that means borrowing a tactic from organizations like the Ontario Undergraduate Student Alliance. Otherwise, a sit-in offers nothing more than a chance for the minister to stretch his legs.