I was bullied every day---then things got better

One woman reflects on her high school torment 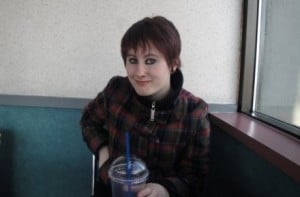 The author at age 15

When I read about Amanda Todd’s suicide, I was affected, not only because someone so young decided to take her life, but also because of how it reminded me of my own adolescence.

To the right is a photo of me at Todd’s age. By the time that picture was taken, I had been bullied practically every day for five years. It started with some older girls who thought my name, Ravanne, sounded funny. They would chase me, scream at me, and throw food at me. Although concerned classmates stood up for me, it never stopped.

As early as sixth grade, I was depressed and socially anxious. When I entered junior high school, I was afraid to talk to new people out of fear that they too would laugh at me. I did make some friends, but for every friend I made, at least two people would obsessively bully me.

At this point in time, I started to develop a fashion sense that was… different, to say the least. I would wear all black clothing, heavy eye makeup, and spiky hair. Classmates would follow me around calling me “Racoon Ravanne,” shove me into lockers, and tell me I should kill myself.

Even some parents and teachers mocked my appearance.

Eventually, I changed schools. Like Amanda Todd, things didn’t get much better there; new bullies were waiting around every corner to make the same jokes that the kids at my former school made. By this point, I had no self-esteem, few friends, and little hope for the future.

But then one day, things changed. The one good thing about my social isolation was the time it left me to focus on school. Although some teachers were a put off by my appearance and quietness, I was praised as a good student. I spent my days at home studying and got into university.

When I arrived at the University of Alberta, the atmosphere wasn’t much like high school. For the most part, people left me alone. For the first time, I felt free to do what I wanted, and free to be who I wanted to be. I started writing, interacting with people who shared my interests—and smiling again.

One day when I was sitting in the campus pub with some new and old friends, smiling and having a good time, it clicked for me that I truly belong here. Although I still have some depressing thoughts, I’m not suffering anymore. Instead, I’m overcoming the anxiety and fear I faced as a youth.

I could only imagine how many teens look at pictures of Amanda Todd and see themselves staring back. If this had happened four years ago, I would have been one of them. So it’s important for young people to know that suicide is not a good option, because as you get older, things get better.

At least, they did for me. They got better at university.

Ravanne Lawday is a second-year English student at the University of Alberta.