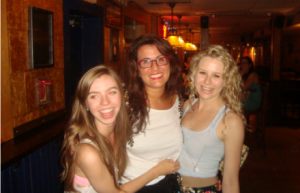 The infamous Tweeter behind the @wstrngirl account has finally been revealed. In fact, it was not one person, but three female friends, reports University of Western Ontario student newspaper, The Gazette. Students were kept guessing about the source of the tweets, which entertained more than 2,600 followers with funny two-liners that were supposedly from the mind of a stereotypical “Western girl.” For example, on March 5 they wrote that “the Ceeps line-up has affected what time I take my birth control pills,” referring to a pick-up bar near campus. On  Dec. 7, when the school was closed for a storm, they wrote “thank god for my cashmere snuggie #snowmaggedon.” The tweeters were Alicia DeBoer, Romina Cortellucci and Taya Denotter, who announced their retirement this week.

Photo courtesy of The Gazette.