How one mother coped when her daughter left for school 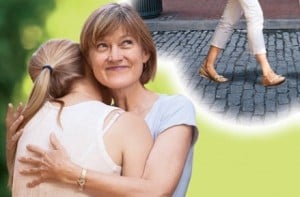 I wasn’t actually planning to attend college with my daughter Eliza when her acceptance letter arrived in the mail last spring. That would be creepy—like the mother in that Robert Munsch book who stalked her grown-up son, breaking into his house to cuddle him while he slept. I am perfectly aware that the parentally appropriate, non-crazy thing to do when your child leaves home is to let them go and have their own life.

And yet, I still felt there should be some kind of special dispensation in my case—since the school that accepted my child was the Savannah College of Art and Design, on the Savannah River, in Savannah, Ga.

Just saying the word filled me with excitement. Savannah! Mint juleps. Southern charm and hospitality. Decadent Kevin Spacey murdering a dewy Jude Law in Midnight in the Garden of Good and Evil. Forrest Gump’s bus stop bench. A college campus in the heart of the city’s stunning, park-dotted historic district, mercifully spared by Sherman in the Civil War (thank you, Wikipedia), spared again in the 1960s thanks to a bunch of indignant Savannah ladies who rose up against the parking lot developers. And—most important—a skin-friendly, humid subtropical climate with winters cool enough to warrant shopping for seasonal fashion items, pretty much perfect the rest of the time, though summers can get uncomfortably hot, but that doesn’t matter because we won’t be there during the, um . . .

You see the problem here? The allure of such an exotic location was putting an unbearable strain on my well-prepared plans to detach gracefully. In fact, it brought on a full-blown case of parental infantilism—that early stage of parental development before you’ve fully absorbed the fact that your child is not you.

Revelling in my daughter’s college adventure was becoming less vicarious and more expropriative by the minute. I found myself humming a pop song from my own university days: If You Leave Me Can I Come Too? (by the Australian band Mental As Anything). I checked out teaching jobs on the SCAD website (wouldn’t it be funny if she was in my class?!). I imagined renting a cute little garret in an old mansion with palm trees and live oaks covered in hanging moss outside my window, where Eliza could stop by for iced tea and a healthy snack after school instead of filling up on biscuits with gravy in the SCAD dining hall .

Admittedly, even if she was going to a frigid Canadian campus, I would have found it hard to let go. After years of putting a sweater on your kid every time you feel cold, and then a few more years of adopting their teen-brain sleep patterns (awake when they noisily come home at all hours; more awake when they don’t), it’s not easy to switch into “Oh yeah, my child is a completely separate individual, going off to have his/her own life, which I will have no part of.”

Factor in a destination like charming, temperate Savannah—and my powers of resistance evaporated like the morning dew on one of the sugarberry trees in Calhoun Square that make up an urban forest created in 1896, when Savannah and Philadelphia were the only cities in North America to “plant trees in an organized manner along streets and boulevards and in parks and squares,” according to the city’s still-vigilant Park & Tree Commission.

Plus I had a lot of enablers—other middle-aged doting mothers who not only thought it completely normal for me to want to follow my child south (“Your daughter’s going to Savannah? OMG. You have to go visit her!”), but quickly decided they should come with me. (“We should all go! Let’s book a trip!”)

A friend of a friend enthusiastically offered her vacation home at a discount—an ocean-front condo 20 minutes east of Savannah on Tybee Island, a small paradise with pristine beaches (Sandra Bullock has a place there), and a local Crab Shack famous for its well-priced platters of fresh seafood and tiny moat filled with baby alligators.

It did give me pause when a much younger friend, Morwyn, reacted differently. She listened to my Savannah fantasies without comment, then turned to Eliza. “Isn’t that every girl’s dream?” she murmured. “To go off to university—and have your mother follow you there?”

I thought I detected a note of sarcasm, and made a mental note to keep my Savannah fantasies to myself because people might not understand that, while I wouldn’t advise other parents to do this, my situation was different. I didn’t want to oppress my child. I just wanted a piece of that sunny southern action! And if she wanted to spend time with me while I was down there, so be it.

When I finally touched down in Savannah in September, it was everything I’d wished for and more. The touristy area was well-contained along a picturesque riverfront. You could walk in any direction and find street after street of stately homes, shady park squares, and historic plaques that summed up the history of the South—Sherman stayed in this house for a month after he didn’t burn down the city; Lafayette spoke from that balcony; Button Gwinnett, a signer of the Declaration of Independence, was buried there after being killed in a duel.

It was only when I got to Eliza’s residence that doubts crept in. I think it was the sight of all those other parents—interlopers like me, good for schlepping carloads of crap from Target until their student offspring were settled, clearly not essential personnel. The children, meanwhile, seemed to be present in body but not in spirit, or at least not any spirit that we could connect to. They were focused on their future, and the sooner we all left, the sooner they could get to it.

As I helped Eliza move into her dorm room, sanity slowly returned. It helped that her two roommates were there, and I didn’t want to embarrass her. I watched in admiration as one girl’s mother assembled a small drawer unit for under the bed (lacking the proper tools, she was using the heel of a stiletto to bang in the finishing nails with deadly accuracy). Then I helped Eliza unpack her bag, and didn’t tell her where to put her things. I handed her adhesive-backed hooks, and watched in heroic silence as she affixed them to the wall and hung things up in a manner that I would have done quite differently. I showed her how to attach Velcro fasteners to the cork tiles from Target that, grouped together, would constitute a bulletin board above her desk, but the Velcro thingies wouldn’t stick to the wall. While I pondered the possibility that the wall needed to be dabbed with alcohol first in order to remove dust, grease or humidity that was preventing the adhesive from adhering, and that we could probably get some at a drugstore just a few blocks away, Eliza leaned the tiles haphazardly on the edge of her desk and said she had to get ready for an orientation session.

The cork tiles could be leaning there still. I have no way of knowing, because in the end, mustering every ounce of self-control I possessed, I did the right thing.

I kissed my daughter goodbye and left her in Savannah.