On Berkeley, and why elite schools should charge more 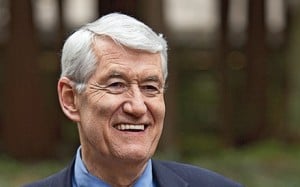 Robert Birgeneau, a physicist and former University of Toronto president, has led the University of California at Berkeley as chancellor since 2004. Last week he announced he’s stepping down at the end of the year. Birgeneau, who turned 70 this month, delayed retirement because of the budget crisis—what he calls “the most extreme disinvestment by the state in UC’s history,” brought on by cuts and economic troubles in California. He implemented tough cost-cutting measures, found new sources of money, and dealt with an uptick in activism.

Q: Undergrad fees at the UC system increased 32 per cent two years ago, pushing costs up three times what they were a decade earlier. Last year, tuition rose another eight per cent, then another 9.6 per cent. Meanwhile, reduced services meant wastebaskets around Berkeley overflowed with trash. It sounds like a rotten time to be chancellor. Why didn’t you just retire?

A: I didn’t retire because that would have been cowardly. Berkeley plays a special role in the world of public higher education. We are arguably—certainly in North America—the only university that competes directly and successfully with the very rich privates: Harvard, MIT, Stanford. That’s an important role, to show you can have a public university that’s as strong as those very well-funded privates.

Q: Just how bad did it get at Berkeley?

A: When I arrived there was a commitment from the government that our funding for paying faculty and staff salaries would go up four to five per cent a year. If that compact had held we would have $600 million this year. In fact, we have $240 million. So in five years, we’ve lost more than half of our money from the government to pay those salaries.

Q: How did you bridge that shortfall?

A: We were not naive about the budget. We whined somewhat, but we also knuckled down and said, “Okay, we need a comprehensive financial strategy.” I was president of U of T for four years, and I learned a lot. Some of the good management practices we introduced at Berkeley we had already introduced in Toronto.

Q: What did you borrow from U of T?

A: One thing is that every large institution like Berkeley and the U of T always has a large amount of money sitting waiting to be spent. Typically these amounts were of the order of [$750 million] to a billion dollars, and they’re sitting in accounts yielding the lowest interest rate. In Toronto we realized we were wasting money and began aggressively investing about half—$400 million or so. We introduced that at Berkeley and ended up generating an additional $30 million to $40 million a year in income.

Q: What else did you find yourself doing to respond to the crisis?

Q: At the same time, Berkeley last year became the first public university in the U.S. to extend financial aid to students from middle-income households—that’s $80,000 to $140,000. Isn’t it counterintuitive to do this in the middle of a cash crunch?

A: Our ultimate responsibility is to educate students, and in my opinion it’s unfair for students to leave university with huge debts. Tuition and fees at Berkeley have gone up rapidly, from $6,000 to $13,000 now. Plus, for reasons I don’t completely understand, the cost of living in the Bay area has been rising. Every time I gave a public talk to alumni, the first thing I heard from the audience was, “How am I supposed to manage when it’s costing $30,000 for my son and daughter and I’m making $100,000 a year?” This is actually something I became aware of in my last year in Toronto. We noted that at the U of T, where there was a very good financial aid system for low-income students, middle-income participation was beginning to drop. And we saw that as a forerunner of a relatively serious challenge facing society—the first signs of contraction in the number of middle-class students.

Q: Let’s talk about Canada. Particularly in Ontario and Quebec, the situation is remarkably similar. Ontario has been warned it needs to cut spending or face a $30-billion deficit in five years. But the province has committed to adding 60,000 new student spaces, and enrolment numbers have been breaking records. Ontario schools will again be allowed to raise tuition by five per cent this fall, the seventh average five-per-cent hike in seven years. In Quebec, tuition is set to jump 75 per cent by 2016. What’s to be done?

A: Those percentages sound impressive but students are still paying a small percentage of the actual cost of their education. The relevant metric is, what percentage of the actual cost are you paying? For public universities, people feel if you’re paying 35 per cent of the cost, that’s fair. In Ontario at least, when I was there, Ontario residents and out-of-province students paid the same, and only international students paid a little bit more.

Q: I think only in Quebec is it different, and students from out of province pay more there.

A: I think that actually is a broken model. I support the California approach, which is that if you don’t come from a family paying California taxes, then you ought to pay for the actual cost of your education. In the same way that Berkeley is very attractive to out-of-state and international students, I would think that flagship Canadian universities like UBC and Toronto and others would be equally attractive. That can represent a major source of income.

Q: You used the word “broken”—are there other ways higher education in Canada is broken?

A: I would say philanthropy is very important in the U.S. for private universities, but also the major public ones. And I believe Canadians—this was true when I was there—give at the rate of 40 cents on the dollar compared to Americans. Affluent Canadians need to step up. I put a large amount of energy into interacting with well-to-do alumni, educating them on the fact that because of the state disinvestment, if they don’t step up their degrees are not going to be worth what they seem to be.

Q: It’s said that costs at Ontario schools are rising largely because they need to compete with the U.S. for people. Can they compete?

A: Yes they can. There’s no ambiguity that Canada could ultimately have public universities that are fully competitive with the very best in the U.S. The fact is Canada’s a rich country, and so partly it’s a matter of whether governments are willing to make the investments necessary to be able to compete internationally. With the appropriate investment, Canada’s flagship universities can compete head on with not just top U.S. universities, but Oxford and Cambridge.

Q: I’m glad you went there, because there’s an ongoing debate here about whether we should embrace a tiered approach to higher education, allowing some universities to charge higher tuition rates.

A: I happen to support that, but I understand how difficult it is. I think it’s probably impossible in Canadian culture, to be honest.

Q: Cuts and rising tuition also generated a new wave of activism, particularly at Berkeley, where Occupy Wall Street protesters tried to camp out last year. What’s that been like?

A: I had lots of activism when I was at the U of T as well. When I was being recruited at Berkeley I described some of my experiences in Toronto and they said, “Well, you’re already well trained.”

Q: It got really heated. In 2009 you and your wife awoke to find protesters surrounding your home, throwing torches at your windows.

A: That was truly shocking.

Q: This wasn’t what you signed up for.

A: No one signs up for that. It was not led by Berkeley students, it was led by Bay Area anarchists. One of the people involved was an arsonist from New York City. So that was an idiosyncratic thing that happened that was not driven by students.

Q: Did it shape in any way your approach to the Occupy Wall Street protests?

A: No. Not wanting encampments on campus was influenced more by the fact that earlier we had people living in trees for 19 months, preventing us from moving on an important construction project. If I was in Toronto I wouldn’t have to worry about that because the people would freeze to death over the winter. We did not want to have an encampment that would be very disruptive of academic life.

Q: When you announced your departure you said you wished you were better able to convince Californians of the value of a higher education. Why in North America are we so inclined to give universities short shrift?

A: There has been a progressive evolution in society to view higher education more as a private than a public good. I think this underlies the disinvestment in education. We got a shocking illustration of this when Rick Santorum actually accused Barack Obama of being elitist because Obama thought people should get a college education. The fact that a presidential candidate would say that shows how far we’ve evolved in a negative direction.