In defense of the white poppy

Why I side with students who won't wear the red poppy 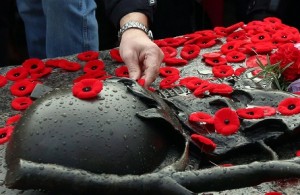 This piece in The Toronto Sun sneers at students for “hopping aboard” a “left wing” bandwagon. The Minister of Veterans Affairs jumped in too, calling the campaign “totally disrespectful.” Meanwhile, over at the National Post, Matt Gurney claims that the “very existence” of the campaign “is insulting by its implication that the red poppy glorifies war.”

Too bad. The red poppy does glorify war. And it has been so successful in doing so that it seems as though its supporters don’t even realize they are doing it. Celyn Dufay, the Ottawa student at the centre of this imbroglio is quite right in explaining, simply enough, “we want to work for peace.”

Here’s what people like Dufay are up against. Gurney, for example, who writes:

there are still Canadians today who remember the Second World War, even fought in it. There are also thousands of Canadians with us today who served in Afghanistan, and countless Canadians who loved or knew someone who went to that far-off land and never returned. There are Canadians who died in peacetime, in accidents at home and abroad, while standing guard in Western Europe across from the might of the Soviet Red Army, or while doing their best to bring peace to war-torn lands abroad.

If I may presume to speak for the students in question, I would suggest that it is the thinly-veiled celebration of the martial spirit that they find troubling. Gurney, for instance, invokes the romantic image of the poor loved ones left at home, as if our forces did not deprive others of their loved ones, and adds more romance with the fairy tale diction of the “far off land.”  No mention of that far off land called Somalia, though, where Canadian soldiers disgraced our nation in 1993 with their murders and lies. No mention of the host of scandals that have plagued the forces. No mention of the forces standing on guard when the military assisted in rounding up Japanese immigrants during the Second World War. Oh, and no mention that the mighty Red Army of the Soviets didn’t seem so bad to us when we allied with it and turned half of Europe over to its brutal, oppressive regime.

But Gurney’s view is nuanced compared to that of the Royal Canadian Legion, which markets the red poppies and which has threatened to sue over the white poppy campaign. As the Legion’s web site has it:

it is not only to honour the fallen that we observe Remembrance Day each and every year. As part of our observance, we also acknowledge the courage and sacrifice of both the Veterans including currently serving.

Again, the rhetoric of heroism is clear. Deceased soldiers are not dead but “fallen.” No one went to war because of wartime propaganda that stoked racism or shamed them into it, but rather because of their “courage.” And no talk of the needless slaughter of millions of pawns in power struggles of empires. No, only talk of “sacrifice” as though the soldiers wanted to die. How can the Legion and its supporters look anyone in the eye and claim not to glorify war?

Perhaps there are times when war is necessary and that may require men and women who are willing to go to war. But even if there is, doing that which is necessary is not necessarily heroic. There are such things as necessary evils. The white-poppy students are suggesting war isn’t one of them. It’s quite within the bounds of civilized discourse for students to suggest that there is nothing heroic about signing up to kill, being trained to kill, and then going and killing. This is not to dishonour the memory of the dead, but to rethink it. In this view, the dead soldier is not a hero. He’s a victim.

So I applaud Dufay and company for their stand. If we are to work for peace, we have to challenge our conventional thinking about war. That’s what education—and white poppies—are all about.