'None of the above' sweeps Windsor student elections

Some students were angry about electoral process; others see racism 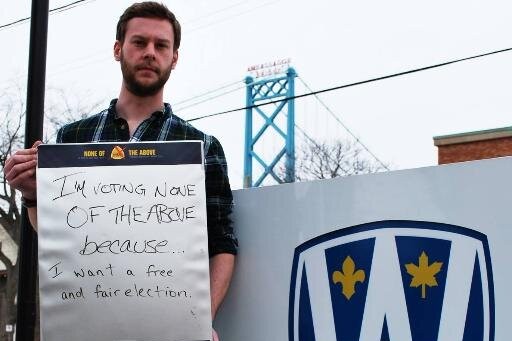 Student politicians running in the annual University of Windsor Students’ Alliance elections last week were surprised to learn that they lost—despite running totally unopposed. All six candidates in line to be acclaimed for the executive positions in the online vote on March 13 and 14 received more “no” votes than “yes” votes.

Students at the southern Ontario school have different theories as to why these six student unionists, who ran together as a slate called Windsor United, faced such a backlash. Some believe it has to do with the UWSA’s recent vote about Israel while others suggest anti-Arab racism was the culprit. One thing many of them seem to agree on is that the results suggest widespread dissatisfaction with the UWSA.

At least part of the “no” vote can be attributed to an ad hoc campaign whose “Vote None of the Above” Facebook page got more than 1,300 “likes” in less than a week.

Nicholas Lovell, a member of the none-of-the-above campaign, wrote a press release published in The Lance student newspaper on March 9 imploring students to vote against all the candidates. The third-year law student says he was only informed of the election in a three-part e-mail he received on Feb. 24, just days before the nomination period closed on Feb. 28. That e-mail read in part, “The University of Windsor Students’ Alliance has now begun the nomination period of the 2014 Winter General Election. If you’re interested in serving in the student union here at uWindsor… [nomination] forms are due by Friday, February 28th, 2014 @ 4PM.”

The second part of that e-mail encouraged students to vote in the UWSA’s Boycott Divestment and Sanctions referendum, which was held online between Feb. 27. and March 1. In that vote, students were asked whether or not the alliance should join a global movement where it would, “Commit to identifying and divesting from companies that support or profit from Israeli war crimes, occupation and oppression.”

The third part of the e-mail said the Electoral Monitoring Committee was hiring and interested parties must apply to vice-president Shaista Akbar by the end of the day.

Lovell says he wrote the press release because he thought the nomination period for paid executives had not been properly advertised. “It should concern students because their money is going for this,” he says, noting the salaries are more than $20,000 each. “Running for an executive [position] is a significant amount of work and if students knew their time was compensated they’d be more willing to take on that work.”

Adam Bednarick, who made the none-of-the-above Facebook page, says he did so after reading in The Lance that all of the positions were uncontested. “In all the years I’ve been here, those positions have been contested.”

Jordan Renaud, a former UWSA Chief Returning Officer and fourth-year student, agrees that the nomination period wasn’t well enough advertised. “We have six executive positions and it just so happens that six candidates who lined up perfectly for those positions were on the same team and the same slate?” he says. “Why?”

Renaud says his election three years ago had posters across campus telling people how easy it was to run and lots of posts on social media. He says this year’s Chief Returning Officer, Shauhrat Gill, put up few posters and didn’t have much social media presence.

Gill disagrees, saying he promoted the nomination with two mass e-mails, 200 posters, Facebook, Twitter and the UWSA website. He also points out that nomination papers for executive positions required 200 student signatures each.

Renaud says recent scandals are also to blame for some of the no votes. Some students were upset when The Thirsty Scholar, the UWSA’s campus pub, closed after years of losing money; others were angry about a defamation lawsuit involving a former president, he says. He think the BDS campaign was part of it. Mohammad Akbar, the rejected candidate for president, was on the executive that allowed the vote to go forward last month. “Voters who had been paying attention would have noticed that.”

Kate du Toit, who ran for the vice-president of equity and administration position on a platform of fighting discrimination and adding a sexual assault crisis centre, has a similar theory on why so many students voted against her slate. “Honestly, I don’t think they felt the UWSA was doing a good job representing them,” she says. She agrees the BDS campaign was part of it. “A lot of students were associating our whole slate with the BDS referendum,” she says, but adds, “the amount of division that has taken place on campus has made our entire slate decide that we do not endorse the BDS campaign.”

Hussein Zarif, who ran for the position of vice-president of academic affairs, agrees that students lost faith in the UWSA in recent years due to controversies like the pub closure and last year’s decision to cut funding to The Lance student newspaper.

Both candidates also say that the UWSA elections policies made it difficult for them to fight back against the none-of-the-above campaign because rules say candidates must get approval of the CRO before speaking to the news media. Since none-of-the-above wasn’t running for a position, they didn’t have such restrictions.

Mohamad El-Cheikh, a member of the UWSA’s Electoral Monitoring Committee, suggests a more sinister reason for so many no votes. He’s looking into complaints that some students were told to vote no because the candidates were Arab and brown-skinned. He says anti-Muslim sentiment has flared up after students voted in favour of BDS. The results of the BDS vote were 798 in favour to 585 opposed. Turnout was low considering Windsor has more than 13,000 full-time students. Alan Wildeman, the university’s president, wrote in a letter on March 4 that he was investigating the vote after “many well-documented and detailed complaints” about the vote. “The university cannot allow student organizations to compromise the university’s commitment to provide a welcoming learning and living environment to each and every student on our campus.” The UWSA agreed to delay finalizing the results of the vote after Wildeman’s urging.

El-Cheikh says his committee has not yet decided what recommendations they will make to the UWSA on Friday about the election that nobody won but that a new vote is likely to take place this spring or this fall.