Is big bad and small good?

Not always. Some things matter more than class size. 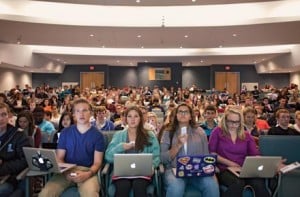 From the 2013 Maclean’s University Rankings

It’s 11:30 a.m. and this is how the morning has gone for the 71 students in Science One at the University of British Columbia—one of the rare small-class programs that brings big universities down to a more human scale. It started with a physics mid-term, which most of these high achievers feel good about. Then a quick, unscripted shift into biology. Projected on the classroom screens was a story from that morning’s headlines about a massive phytoplankton bloom off the B.C. coast caused by a program that seeded the ocean with iron sulphate in hopes of building a salmon food source. Chemistry instructor Chris Addison happily ceded time to biologist Celeste Leander so students could discuss what she called the “justifiable concerns” of messing with the ocean environment.

That diversion is what Addison calls a “typical Science One moment.” Seated at the back of the room were other instructors in this holistic program—a physicist, a couple of biologists and a mathematician—all welcome to contribute. Instructors try to sit in on as many other classes as possible, said Addison. “That’s where you get the interplay between the disciplines.” Addison then waded into a mini-lecture on energy levels in multi-electron atoms, before the class split into groups of about six to work through a series of questions. They debated the answers among themselves, knowing they’d have to justify their reasons before the full class, if called upon. Amir Ashtari, 17, prefers the small class size to the usual first-year prospect of packed lecture halls. “Here you are amongst a group of friends who are respectful to you and also who are smart,” he said. “Even if you ask a stupid question they come and help you.” Hanne Collins, 18, said she likes the accessibility of instructors, and that they know her name. “Their doors are open and if you have a question, you just walk in,” she said. “They’re not bogged down with 500 students.”

Chemistry ends at 11:30 and a visitor slips into the room, quietly setting down his backpack. The class is introduced to this week’s guest lecturer: Neil Turok, an international rock star of theoretical physics and cosmology, and director of the Perimeter Institute for Theoretical Physics in Waterloo, Ont. Short of an appearance by Stephen Hawking, landing Turok for a tiny first-year science class is about as good as it gets. Seconds into what was to be a 10-minute talk, the students are so quiet you can almost hear an electron spin.

Some universities have populations larger than the hometowns and cities students left behind. UBC has a full-time undergrad and graduate enrolment of over 40,000 at its Vancouver campus; at the University of Toronto it’s over 70,000. The prospect of being an anonymous face behind a laptop in a mega-lecture of 500 or 1,000 students can be daunting. For some it’s an excuse to tune out and retreat into their social networking sites, but for others there’s the frustration of having little prospect of engaging with the talking head at the front of the room to ask a question or challenge a concept.

There’s always the alternative of smaller universities—like Acadia University in Wolfville, N.S., with 3,500 students, or tiny Quest University in Squamish, B.C., where the 156 incoming first-year students in the independent non-profit liberal arts university have class sizes of 20 or fewer—though there are trade-offs with limited course availability, or in the case of Quest, higher tuitions. Larger universities, by necessity, are becoming increasingly sensitive to student complaints that rising tuition fees should buy more than a chance to download data in giant lecture halls. The response at more nimble universities is twofold: offering some small-class experiences where budgets allow, and a commitment to more interactive and engaging large classes.

The University of Western Ontario, in London, Ont., will launch an elite 25-student liberal arts program next year; it also has a highly popular mythology class in classical studies with 500 students, says Michael Milde, dean of arts and humanities. “Larger classes don’t have to be a recipe for sleeping in the back row,” he says. “It can be done.”

What is the optimum class size? The results of a new focus on the science of effective teaching, a remarkably untrammelled research area at the university level, shows smaller is not always better. UBC is among the schools at the forefront of such work due in large measure to the Carl Wieman Science Education Initiative. Wieman, winner of the 2001 Nobel Prize in physics, chose to pour his passion into improving undergraduate education by fostering an evidence-based approach to pedagogy. “A class that relies on the traditional passive lecture format is equally ineffective with 20 or 200 students,” he concludes in a recent paper. Effective classes, large or small, require instructors engaging with students and students working together in and outside class to collaborate on research and problem-solving. Technology is an essential tool for professors, says Wieman, such as equipping students with electronic “clickers” to give real-time responses to lecture questions, as well as “extensive course web pages, and email and online communications and survey systems.” So far the limited data on optimum class size, he suggests “is less than 400 but is perhaps more than 50.”

Still, it’s hard to argue some students draw more comfort and results from a tight, committed cohort of students. With a bit of careful shopping it’s possible to find an increasing number of innovative boutique programs at even the largest institutions.

When 18-year-old Camille Horton-Poole of Waterloo went university shopping, she wanted a school large enough to offer a spectrum of courses to feed her passion for theatre, yet intimate enough that she wouldn’t vanish into the institutional maw. “I didn’t want to go to a university where I would just be a number,” she says. Her search ended in Halifax at King’s College, which offers, she feels, the best of both. With an enrolment of just 1,200, King’s is an affiliated sister institution to Dalhousie University, some 15 times larger. “I knew coming here you would actually be known as a human being and a person.” She’s already taking a theatre elective from Dalhousie. Students at King’s draw courses from both schools in subsequent years.

There is a surface appeal of small classes for those out of high school who are shy or insecure, but that can be misleading. The best small-class experiences are hugely interactive—there’s no place to hide. At King’s, mornings begin with the entire “foundation year program” (FYP as it’s invariably called) of almost 300 assembled for a lecture on the last night’s reading, perhaps a segment of Plato’s Republic or Virgil’s Aeneid. Afterwards, the group breaks into instructor-facilitated tutorials of about 15. “You might get a lot out of a lecture, but you almost might be more confused by the end of it,” says Alex Mercer, 18, also in first year at King’s. “I think tutorial is the best place to learn more. You can voice your own opinions and ask your own questions.”

Mercer is among many who see FYP not as a exercise in esoterica but a solid, well, foundation. “I think a liberal arts education is a great way to start into anything,” he says. Critical thinking skills have a universal application, says Horton-Poole. The common joke is that King’s grads are destined for law, “because we’re taught to argue very well.”

It’s a similar multidisciplinary experience in Science One at UBC, or its sister program Arts One, which bills itself as a program for the intellectually curious—those “more likely to enjoy a tutorial of four than a class of 400.” For Collins, Science One was a chance to sample all science disciplines. Enrolment required a foundation of all Grade 12 sciences and math, an additional program application and an essay on her aspirations at university. “They really look for people who are wanting to learn.”

At King’s, FYP is something of a first-come-first-in experience, says Kyle Fraser, its program director. This self-selection process tends to attract motivated high-achievers, but it also leaves room for students with marks in the high 70s who didn’t flourish in high school. “We do often see the fascinating case of the late bloomer, who did well enough in high school,” says Fraser, “but then gets into the FYP environment and suddenly just takes off. Those, in a way, are some of the most amazing examples of our success, I think.”

There are small-course experiences at many universities for those applicants motivated to rummage through the offerings. Guelph, McGill and Carleton are among many who offer first-year seminars, usually single courses limited to 30 students or fewer. McMaster has two comprehensive programs, each limited to about 60 students: arts and science, and honours integrated science (iSci), each taking a holistic view of their disciplines.

Next September, Western goes micro with the start of its innovative 25-student School for Advanced Studies in the Arts and Humanities. Requirements include a minimum overall average of 90 per cent, with rare exceptions for extraordinary CVs. “One hears of gigantic classes of 1,000 people with one talking head at the front. This will not be that,” dean Milde says with understatement. Students can expect instructors from the larger department’s 140 professors, second- or third-language instruction, internships in community organizations in London and abroad and academic fieldwork. Fundraising is under way for travel scholarships. “It’s not intended to be elite for rich kids,” says Milde. “It’s intended to be elite for smart kids.”

Arts programs especially need to get relevant if they’re going to draw top students and overcome perceptions they are training the baristas of tomorrow. Joel Faflak, director of Western’s fledgling program, is a case in point. He left a successful produce business at 28, drawn to academic life and seeing the need for commerce to be grounded in deeper things than the bottom line. “What I wasn’t encountering was a training in human nature and the complexity of human nature, the human situation on a global level”—skills he believes the new program will forge with real-world experiences.

Back at UBC’s Science One, Turok’s 10 minutes have come and gone. He talks of physics as “a message of the future.” He waxes eloquent on the ethics of science, and the “great tragedy” that it is separated from the disciplines of philosophy, history, art and literature that add wisdom to science’s knowledge. (A visitor imagines the cheers erupting at King’s and Western with that thought.)

The students pepper Turok with questions as he paints word pictures of the quantum world he believes is on our doorstep. In 10 years a laptop will have the digital memory to hold every book ever written, he says, with an indifferent shrug. But a quantum computer, he tells them, “can hold every book that could be written.” It’s a lot to digest before lunch: this tiny, lucky class of 71 has just had a glimpse of the infinite.