Is the media fair to York University?

Analyzing the many reports of sexual assaults on campus 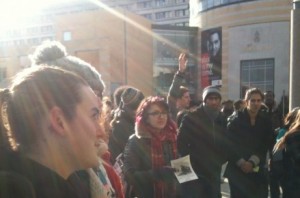 A rally to discuss safety at York University in November, 2012 (Melissa Sundardas)

It’s less common to see headlines referring to sexual assaults at other schools, so it’s easy to assume York has a worse sexual assault problem.

But this conclusion is probably wrong.

What tipped me off was a piece that Leslie Armstrong, editor of The Excalibur student newspaper, wrote earlier this year about violent crimes and York University. Here’s a sample:

When a murder happens at St. George and Bloor [two downtown streets]… Imagine how the Toronto Star would cover such a story. Most Torontonians know that intersection and don’t need any landmarks for reference. They don’t need to be told that it’s just north of the Rotman School of Management or Robarts Library [at the University of Toronto]. The article would simply mention the intersection of the crime scene. Yet when the Star reports that a 22-year old man is stabbed to death outside Randy’s Sports Bar and Restaurant on Keele just south of Steeles, it can’t be without mention of York University, even though the bar is a good 20-minute walk from the outskirts of the Keele campus.”

She goes on to conclude:

Ryerson and the University of Toronto’s St. George campus could be just as unsafe, if not less safe, than York’s Keele campus, and we wouldn’t know, but all we’ve ever heard about the Keele campus is bad news.

It looked like Armstrong was on to something, so I checked her assertion that York’s name ends up in more crime reports. I searched for the words “York University” and “sexual assault” in the ledes and headlines of all stories published in the past two years on Infomart, an archive that includes most of Canada’s major newspaper stories. There were 39 results. The same search for Ryerson yielded two;  the University of Toronto yielded seven. So yes, the media have published many more stories about sexual assaults at York, despite it being in an statistically safer neighbourhood.

A closer look at the 39 search results reveals another reason, on top of Armstrong’s theory, that I believe may explain why York shows up in more news reports. Of the 39, several from 2011 were about SlutWalks, the movement that followed an infamous comment a police officer made about sexual assault while speaking at York. Several more referenced Qian Liu, the Chinese student murdered near York during a webcam conversation. Both incidents shone international spotlights on sexual assault at York. Everyone heard about it. How does that explain the dozens of articles referencing York since? I suspect confirmation bias. After the two high-profile incidents, reporters may be more likely to see sexual assaults at York as news.

What does this mean for students and parents? I think it means they should be no more worried about sexual assaults at York than at U of T, Ryerson or anywhere else. In fact, they might feel more comfortable choosing York knowing that, at the very least, people there are talking about it.