It depends whom you ask 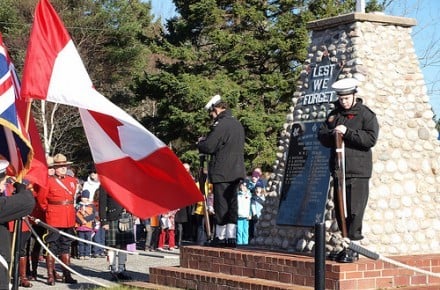 A Facebook posting advertising a Remembrance Day Pub Crawl at the New Brunswick Community College in Saint John is “disrespectful” and “in bad taste,” Jack Watt of the NBCC Student Representative Council told the Telegraph-Journal.

The page features a photo of a poppy with “Lest We Forget” underneath. It reads “join us to remember the brave men and women that fought for our country. 11 bars in 11 hours…” It says that crawlers will start their day at 10:30 a.m., which means they will have drinks in hand during the 11 a.m. moment of silence.

The event has not been sanctioned by the school. Both students and teachers are upset, says Watt.

But Larry Lynch, the president of local Royal Canadian Legion Branch 69, told the newspaper that, although he wouldn’t take part in such an event, “people have a right to remember however they want to remember.” He added: “it’s a free country and that’s what our soldiers fought for.”

Remembrance Day marks the signing of the armistice that ended the First World War on Nov. 11, 1918 at 11 a.m.