Is this the best exam question ever?

Prof. Pettigrew on the "write your own questions" final 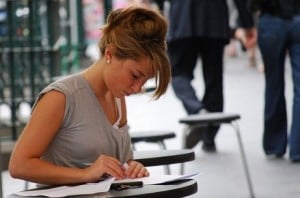 Stories of bizarre exams are favourites among university students and professors alike. As far as I can tell, most of them are urban legends, but they are fun, nevertheless.

There’s the old chestnut where the philosophy professor asks just one question on the final: “Why?” While most students toil for hours trying to come to grips with the big questions of meaning and purpose, a clever student writes only “Why not?” and gets an A+.

Then there’s the Cambridge student who supposedly demanded cakes and ale at his exam, citing an ancient rule from the medieval university. He got his food but then got kicked out of the exam when the same old rules said he should have been wearing his sword.

My personal favourite is the one where two partying students miss their exam and plead for a make-up test, claiming they got a flat tire on the way to the exam. Their lie is exposed by the final question of the exam, though: “Which tire?”

So it was with great interest that I learned of the buzz around one Tyler Cowen and his story of an exam with no questions at all. Students were supposedly told, “Here is the exam. Write your own questions. Write your own answers. Harder questions and better answers get more points.”

What are we to make of such an exam? We could say that the professor has abdicated his responsibility to make up a fair exam that really tested students knowledge and abilities. And how could the evaluation of the exams be fair if everyone was writing a different question. And wouldn’t such a test allow relatively unprepared students to highlight the little they know while concealing the vast amount of material they don’t know?

On the other hand, we might praise the instructor for breaking out of the mold and getting students to really think about the material. Rather than simply reproducing the tired, old questions of the past (in some cases literally because we professors tend to reuse exam questions) he called on his students to think about not just what the important answers are, but what the important questions are. And isn’t that what education is all about?

Along these lines, the key point is that the professor specified that harder questions would yield better results. In this way students who purposely posed rudimentary questions—with consequent facile answers—would do poorly because they didn’t challenge themselves.

But this is where things get strange. I have a feeling that most students would hate this exam. Because, for most students, the last thing they want is to challenge themselves.

I have some anecdotal evidence for this because I once did something a bit similar on an exam. In a question which would normally have had two possible topics, I added a third, that went like this: “For this topic, explain why the other two topics have failed to address some crucial aspect of the course material.” The idea was that I would not be forcing students to write about what I thought was important, but rather give them the chance to write about what they thought was important.

Only one student out of about forty chose that question.

As such, an exam with no questions is a student’s worst nightmare. Maybe that’s precisely why Tyler Cowen’s prof gave it in the first place.