Students boycott Israel, but are blasé about Syria. Why? 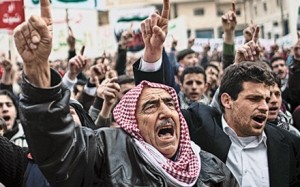 March is upon us, which means the Oscars have been awarded, and that other harbinger of spring is around the corner: Israeli Apartheid Week.

Ordinarily, both events are masterpieces of predictability, with the Academy Awards ushering the usual suspects to the podium (Meryl Streep anyone?), and Israeli Apartheid Week featuring the usual anti-Zionist suspects on megaphones (among them the now famous IAW sub-group, Queers Against Israeli Apartheid, which I’d argue is largely composed of gay Jewish girls who didn’t have fun at summer camp.)

This year the Oscars have come through in predictability, but Israeli Apartheid Week is shaping up quite differently. It’s traditional at Passover seders for the youngest member of Jewish families to ask the “four questions,” which inquire why “this night is different from all other nights.” This year it might be prudent to ask a fifth: why is this Israeli Apartheid Week different from all the others?

The answer is just northeast of Israel, in Syria. In the past 11 months, almost 9,000 civilian protesters and nearly 3,000 anti-government rebels have been murdered by Syrian President Bashar al-Assad’s Ba’ath party dictatorship. Approximately 400 children have been imprisoned and tortured. Meanwhile, Assad’s government claims that 89.4 per cent of Syrians had approved a new constitution that could keep Bashar in power for another 16 years, along with the 12 years he’s already ruled, and the 29 years his father Hafez held power before him.

You’d think that anyone committed to the cause of justice in the Middle East would put the atrocities in Syria at the top of their to-do list. But the Canadian organizers of Israeli Apartheid Week—loudly devoted to ending oppression and achieving social justice for all—won’t be talking about Syria this year. Instead, they’ll spend March 5-9 railing exclusively against the “Zionist regime” at a university campus near you. Events will include slam poetry renditions, hip-hop shows, and an apartheid poster contest with a top prize of $400.

You could accurately call this tunnel vision activism. Most hopes for mainstream credibility IAW activists might have in their criticism of Israel tends to be destroyed by their singular abhorrence of the Jewish state. No country deserves a free pass because its crimes don’t add up to its neighbour’s, but to boycott one injustice and ignore the far bloodier one next door isn’t just odd: it’s a clear statement that those at the helm of Israeli Apartheid Week hate Israel more than they hate oppression itself.

This is a reality noted by even the anti-Zionist darling and American intellectual Norman Finkelstein, in an interview at Imperial College this month. Finkelstein, who has long been a supporter of the BDS movement, named for its focus on punishing Israel through boycotts, divestments, and sanctions, now claims, scathingly, that the BDS is doomed to irrelevancy by its gross “disingenuousness” on the subject of whether or not Israel should exist to begin with. “I support the BDS,” he says, “[but] their goal has to include the recognition of Israel, or it’s a non-starter.” Finkelstein is right. If you want to uproot a country’s policies, you should make it explicitly clear that you don’t want to uproot the country itself. Unless, of course, you do.

That the folks behind Israeli Apartheid Week wouldn’t mind if the country disappeared is evident in their blasé response to terrorism against Israelis. The movement’s promotional video features a series of cartoon slides about the conflict, one of which reads: “When a people fight the occupier / It is not terrorism / It is resistance.” But there is nothing noble or necessary about blowing up innocent civilians at a falafel stand. Such terrorism is not resistance. It’s murder—something IAW leaders have accused Israel of time and time again.

Hypocrisy aside, the movement’s reluctance to recognize the Jewish state’s right to exist (they claim to be “agnostic” about Israel’s existence), coupled with its failure to stand up for any other oppressed or occupied peoples, is an open invitation for Jews to cry anti-Semitism. Anti-Zionism is not anti-Semitism, anti-Zionists argue, but Israel’s unique distinction in their ideology as the very worst place in the entire world has most Jews begging to differ. In my final year of university, a friend of mine—who we’ll call Sandy Cohen—wanted to organize a non-aligned event to run alongside Israeli Apartheid Week, to educate uninformed students about the conflict from a neutral standpoint. Organizers of Israeli Apartheid Week were less than pleased with the idea—they were having a party, and she was trying to crash it. One organizer even compared her to a Nazi and claimed that, like “all Zionists,” she had a knack for “twisting her words.” Not once did Cohen declare herself a Zionist. The only thing her detractor knew about her was her name—which is, undeniably, Jewish.

If all people who criticized Israel were anti-Semites, I’d be an anti-Semite. But it’s this kind of nastiness and hypocrisy that makes you wonder if the week isn’t an indictment of so-called Israeli apartheid, but rather a morbid celebration of a problem none of the protesters really wants solved. Haaretz columnist Bradley Burston argues that peace isn’t the product of “freedom for one people at the expense of another, but freedom and independence for both.” Until the Israeli Apartheid Movement acknowledges this, it will remain nothing more than a thinly veiled anti-Semitic frosh week for the far, far left.