It's time for the Academmys! 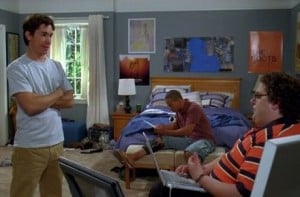 It’s awards season again, and amid all the talk of Grammys and Emmys and Oscars, I began to muse about my favourite academically-themed movies. For your consideration, then, I have compiled my nominees for top university movie.

As always, I freely admit that my choices are entirely subjective, but I did give myself two criteria. For one, they had to deal with university-level education, not other levels of schooling (so goodbye, Mr Chips). For another, they had to deal with university instruction in some way, so no movies that are simply set at a university or college (Revenge of the Nerds) and no movies where the professor doesn’t really do much professoring (Indiana Jones). Here, then, is my list.

Orange County (2002). Already, I have bent the rules because this film deals mainly with high school student Shaun Brumder (Colin Hanks). After being unfairly denied admission to Stanford, Shaun goes to crazy lengths to get admitted so he can study with his idol, Professor Marcus Skinner. Shaun reminds a lot of us academics of ourselves because he looks to university life as an escape from the mindless bureaucracy (and even more mindless teaching) of high school. And when he finally meets his academic hero, that hero turns out to be just what he hoped for: an inspiration. Even if the inspiration was not the one he thought it would be.

The Sure Thing (1985). This one bends a rule another way because while it is about university students, it is largely a road movie/odd couple/love story about the unlikely romance between brainy, reserved Alison and free-spirited slacker Gib. But Alison and Gib meet in English class, get to know each other when she is tutoring him, and finally fall in love during a reading of Gib’s surprisingly acute English term paper—as chosen and read by the brilliant Professor Taub. The film launched more than one career, and deservedly so.

The Mirror Has Two Faces (1996). This film, adapted from the French film of, more or less, the same name, falls into the usual movie trap of showing English professors who don’t actually teach English, but teach, instead, something like “Embrace Life 101.” Still, when English prof Rose teaches math prof Gregory that his classes can’t just be little math parties where he is the only guest—well, call it required viewing for any professor anywhere. It reminds us that any subject, even math, can be wonderful if your professor is willing and able to share his passion for it with you.

Accepted (2006). Not that many people saw this odd little film when it came out and not many have called it great since. Still, despite its admittedly silly premise—Bartleby Gaines can’t get into college, so he creates a fake one—this flick somehow manages to ask the big question (what’s a university education really for?)—better than lots of other movies with bigger stars, grander locations, and better reviews (take that, Educating Rita!).

Creator (1985). One of my all time favourites, this movie finds the great Peter O’Toole at his best as the eccentric but brilliant biologist Harry Wolper who recruits a good-hearted grad student into an invented mega course in “The Big Picture,” really Wolper’s efforts to clone his dead wife. There is a fine supporting performance by David Ogden Stiers – a bullying rival brilliantly blasted by Wolper as the only biologist in the world whose lab has nothing alive in it. And I dare you – dare you – not to fall in love with Virginia Madsen. It’s pretty sentimental, but the sentiment is honest, and it provides an infallible rule for knowing whether you are in love. How many movies can say that?

No doubt, I’ve left off some of your favourites. Probably all of them. And no doubt some will call my choices arbitrary and absurd—and in so doing will feel better about their own preferences.

But, really, isn’t that what awards are for?

What are your favourite academic movies? Tell us in the comments section.