Join the fastest growing campus cause: Concerned Students for Whatever is Popular

How much do we know about what we stand for? 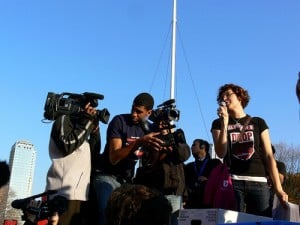 Last night I went to the first in a series of free public lectures at Ryerson University. The series, called “Prospects for Peace: A Forum on the Israeli-Palestinian Conflict” was hosted by the International Issues Discussion student group.  Last night’s lecture was by Dr. Juan Cole, a history professor from the University of Michigan. Cole has authored a number of books, is a regular on PBS’s Lehrer News Hour and has appeared shows like the Colbert Report, ABC Nightly News, Nightline and the Today Show. So, needless to say, I was anxious to see what he had in store.

“Palestinian Statelessness as the Heart of the Mideast Crisis” was the title of his lecture, and I got there just as it was about to start. I slipped past the two security guards manning the front entry and settled into a third row seat. Lucky me, the two seats on either side were empty; I had somewhere to toss my coat and bag. So were the few in front of me and a couple to my back left. At five past, the lecture still hadn’t started, and the hall was still half empty. To add—anyone who’s seen Ryerson’s lecture “halls” knows they compare pitifully to the grand galleries of the University of Toronto and other mid- to large-sized universities. The room could probably hold a few hundred—tops.

By the time the lecture started, a third of the seats were still unoccupied. I looked more closely at the audience. A lot of them didn’t look like students. (Well, maybe the mature kind.) I saw some former professors, staff members, and lot of unfamiliar ‘boomer’ faces. In fact, it seemed as though half or more of the listeners were over 40. So, where were all of the students?

To be fair, the new episode of “Glee” (the latest Global hit) was on last night. As well, it was Wayback Wednesday at club Menage on King Street. So, I guess important alternatives were aplenty yesterday’s eve. Still, I can predict based on years past that we won’t have the same sort of attendance problems when Israeli Apartheid Week (IAW) rolls around.

Last March, Ryerson hosted the kickoff to IAW. There were hundreds of students packed in halls listening to the opening addresses by speakers such as Omar Barghouti and Naomi Klein. Events throughout the week were also hosted by York University and U of T, and included flag-waving (both sides) button-wearing (both sides) and the erection of mock barbed wire walls and security checkpoints. And from what I can recall, there was no shortage of participants.

So for me it’s a bit of a head-scratcher. So few show up to lectures, but so many show up for protests. Where does all of this political passion come from, if not from information?

Maybe I’m wrong (and I’m sure there are a lot of you who think I am) but based on the readings I’ve done and lectures I’ve attended, this and so many other issues are way too complex and the information so heavily convoluted that infallible devotion to one side seems grossly unmerited. Again, maybe I’m wrong. But I recognize that I know far too little to call it black and white. So I’m going to devote my time to hearing from the experts, not claiming to be one.

I’m not simply referring to issues of the mid-east. Take a stroll on many Canadian campuses and you’ll be swimming in a sea of political buttons and graphic T’s :

We all like to belong; we like to be affiliated, we like to stand for something. I just wonder how many of those sporting “Obama” tees know the major targets of his domestic policies. Or the debate surrounding his health care reform. Surely, I have no way of knowing. I can just hope that at the next Prospect for Peace lecture, I’ll have to keep my coat on my lap.