If you're looking for work experience, consider going somewhere new 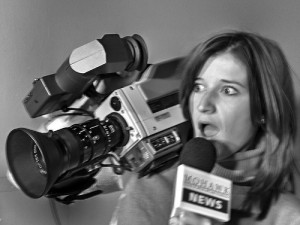 As a part of the Journalism program at College X, students go on four-week internships during their first year (for the second half of March and the first two weeks in April). Second-year students have always done a six-week internship in January and into February.

This year, they’ve changed the rules a little bit. Six weeks has been shortened to four weeks. And frankly, I’m delighted.

I guess Instructor A and B were getting some freaked-out students. (“I have no family out of the area. I need to stay here in City X.”) Well, there’s 11 of us and only one newspaper in the whole town and three radio stations.

As for me, I dished out $1,000 so I could stay at a nice bed & breakfast down the street from the news office, in Town X where I’d previously attended high school and had a couple friends. Generally, I got great stories: people stories, which is the best kind (to me) that a small town newspaper can offer. Although my experience at that news office was a good one, I always felt very out-of-place. There was only one other full-time reporter there who was a woman and she worked evenings so I didn’t see her much.

Otherwise, I was in an office of men. The editor? Male. Both the copy editors? Male. The other two full-time reporters? Male. The sports reporter? Male. Male, male, male. Which makes it look so strange to me that I only have three males in my journalism class.

I had assumed I’d be going back to the same news office this year. I knew the place. I knew some of the people, although several of my friends had since gone to university. But I decided to take a chance and look into accommodations in another town. I do know a few people there and yes, my aunt works in that town… but mostly, I know very little about this town (which I will refer to as UniTown X). But Instructor A once told me, “There’s no better way to learn about a town than being a reporter in it.” So, I’ll keep that in mind while working there.

UniTown X is a university town — and not much else. The newspaper is a weekly instead of a daily, which will likely be a bit different. There is an editor and one other reporter- and she’s a she! And guess what: I’ve found a tiny place to rent for the month of January- only $325 per month! It’s not the Ritz, by any means, but as long as I have Internet access, I don’t even need much else. (Although food is a necessity.)

This post, albeit lengthy, does have a point, I promise. If you’re in college and looking for a place to do your internship, consider going to a town you don’t know much about. If everyone just stuck to their hometown, nobody would go anywhere! Nobody would live anywhere else! Life is too short for that.