Journalists get 'F' in Maple Spring 101 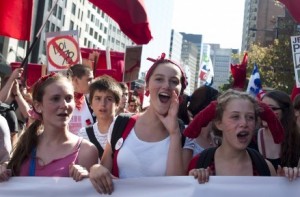 The Quebec student strike of 2012, also known as the Maple Spring, generated global headlines and led to the cancellation of large tuition increases. The sometimes violent protests also raised questions about how the media covers student-led movements. In the Quebec case, many students gave the coverage a failing grade.

Gabriel Nadeau-Dubois, the most visible leader of the Quebec movement, says that at one point bodyguards accompanied some journalists covering the protests, because students were so angry about coverage they saw as shallow or biased, that reporters worried for their safety.

“After 20 weeks, people were very angry,” recalled Nadeau-Dubois, who served as the chief spokesperson of the student group CLASSE. “They were being beaten by the cops and they were not being listened to by the government,” he added, “so they turned against the journalists.”

Nadeau-Dubois made the comments during a panel discussion about how the media depicts student and civil society movements, like Occupy, in Quebec, the U.S. and the U.K. It was part of the Worldviews Conference on Media and Higher Education held at the University of Toronto this week.

Nadeau-Dubois says media coverage of the protests remained fixated on the movement’s criticism of Quebec’s relatively low tuition levels, yet the movement was concerned with much more.

“For many protesters, the increase in tuition fees was understood as a symptom of a much larger phenomenon: the commodification of education,” he said later in an interview. “That was missed in the Quebec press, but I would say it was worse in the rest of Canada.”

Jesse Rosenfeld, a freelance journalist who covered the Quebec protests and spoke in the panel discussion, agreed with many of Nadeau-Dubois’s points.

Rosenfeld, who is typically based in the Middle East and reports for the Toronto Star, The Nation and Al Jazeera, said the psyche of the Quebec students was “completely misunderstood.” The initial fight against tuition, he said, bloomed into a larger response to everything from the sour job market to global austerity. “The media was completely unwilling to put those things together.”

Elizabeth Redden, a correspondent with Inside Higher Ed, a Washington, D.C.-based education website, was more broad in her critique. She argued that the media finds it easier to cover problems with simple, identifiable solutions; reporters struggle when the solutions become less clear.

“When we’re presented with something that seems amorphous, we don’t necessarily know what to make of it,” said Redden, who covers international higher education issues. She pointed to American coverage of the Occupy Movement. “The media didn’t know what to make of Occupy.”

The Occupy Movement involved many ideas, yet the media was searching for only “realistic” and “achievable” solutions, she said. “More radical proposals take longer for media to bite into.” The result is often a “patronizing treatment” of the students involved, she said.

Anna Goldfinch of the Canadian Federation of Students concurred. She said students are often portrayed as “entitled,” spending money on expensive smartphones while whining about high tuition rates. The reality, she said, is that current students simply want a return to the conditions experienced by previous generations. In 1993, she says, a typical Canadian student could cover his or her full tuition bill by working a minimum wage job for nine weeks. Today that same task requires 20 weeks, she said, adding “students actually do have it harder than their parents did.”