How can this campus group claim to fight oppression? 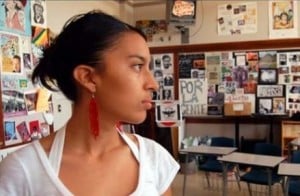 From the film Precious Knowledge

A friend and I went to a movie night one Friday evening in January hosted by the Students of Colour Collective (SOCC), a campus group at the University of Victoria, where I am on a transfer from the University of Manitoba completing a double major in Criminology and Psychology.

It was a spur of the moment decision to go, but we were excited to get out and have a fun night. The movie being presented was Precious Knowledge, a film about the struggle of the Mexican American Studies Program to continue after it was banned by a school board in Arizona.

We arrived, sat down and waited for the movie to begin. My friend asked if he could help himself to a glass of the juice that was set out on the table. The host replied that the beverages were for movie night attendees. She then informed us that the event was for community building and not open to the public. We were specifically addressed in front of the room of people. There was no announcement that it was a closed event.

Instead, we were singled out. The host explained the movie night was only open to “people of colour” and “Indigenous people.” With that, the host asked my friend and me to leave. She apologized for any inconvenience and added that she was sorry, but that it was a closed event.

My friend and I both appear white, but we are both Indigenous. In fact, I am a card carrying member of the Manitoba Métis Federation and a citizen of the Métis Nation. I am a direct descendant of some of the first people to arrive in Canada from England. Peter Fidler came to Canada from England, worked with the Hudson’s Bay Company and married Mary Mackagon, a Swampy Cree from Norway House in 1821. That’s how the legacy of my ancestors began here in Canada. Métis people often face discrimination from both white and Native communities, many times due to difference in skin colour. Systematic oppression of the Métis was a result of colonization that is still felt by many today.

We left the movie night feeling unwelcome. We didn’t feel comfortable testifying to our Aboriginalness in front of a room full of people who just watched us essentially be kicked out.

In my opinion, we experienced extreme racism by a student group that claims to “actively work against oppression.”

After scouring both of the SOCC websites, I could not locate any information on closed events, but this idea seems racist and highly exclusionary. I did locate a statement on the SOCC website that said, “ally hours are usually Monday to Friday.”  I was not able to locate what an “ally” is, but from my experience I would assume it is an individual who does not identify as Indigenous or coloured.  This suggests people with the wrong skin colour are only welcome during certain hours.

I contacted the SOCC to ask a few other questions. However, the opportunity to comment was declined. I was advised by Jessica Humphries, the SOCC coordinator, that they would be collaborating with the Native Students Union on an article in The Martlet student newspaper on March 28th. The SOCC would not speak with me on the record, but via e-mail Humphries offered to “sit down and have a meaningful conversation outside of this notion of being asked to comment.”

I understand the need for spaces where people can feel safe. Everyone wants to live in a world where they are not victims of prejudice and hatred. But when securing safety for one creates oppression for another, how can we claim to have a safe space? Should my lack of visibly coloured skin be something that prevents me from entering a room of my peers? Should I be judged based on the color of my skin at all? Disallowing someone from an event as simple as a movie night, based on race, seems to me to be actively creating oppression.

It is not inclusive to systematically exclude people based on the colour of their skin, be it black, white, red or yellow.  If a room of white people told people with coloured skin they were not welcome due to their appearance, uproar would result. These concepts of racially closed spaces do not appear to create an environment that fosters equality and open dialogue. Having to make an appointment or attend the office during “ally” hours does not seem accepting. If we exclude someone based on the colour of their skin, how can we identify as anti-racist?

Racially closed events should not be allowed on campus.