Artist Deanna Bowen says work is meant to be provocative 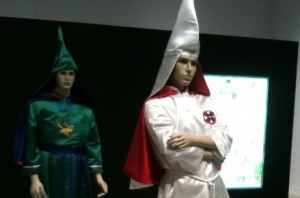 These pieces are part of a daring art exhibition at the Art Gallery of York University entitled Invisible Empires, which presents a collection of archival material that shows how the violent white supremacist organization had a role in 20th century Canadian history—not just American history as many Canadians likely believe.

Hanging such banners on campus seemed likely to cause an uproar among people of colour, and some were indeed initially upset. However, it seems to have sparked a conversation.

“They’re not put up to be harmful,” says Deanna Bowen, the black Toronto artist behind the exhibit. The banners are “meant to get you inside to hear more about this history.”

Bowen says the premise of Invisible Empires is to reflect on how her ancestors’ belongings were burnt to the ground in Alberta after migrating from Alabama, Texas and Oklahoma to escape lynchings and Jim Crow laws. “Most people build on this idea of Canada being a haven for blacks—the whole Underground Railroad and all of that history, which is real,” says Bowen, “but there are also these other histories about black treatment in Canada that don’t get brought forward.”

The banners outside are reproduced from a 1925 KKK mail order catalogue. Inside the exhibition are KKK archival materials in visual, audio, film and even textile forms, which are presented without any context so viewers can assign their own meanings and thoughts to what’s in front of them.

The walls are hung with pages from a 1911 petition against the immigration of blacks in Western Canada and framed newspaper clippings from 1964 that document the integration of American school systems. The Ku Klux Klan of Canada Oath and Allegiance and Oath of Secrecy documents can be viewed. There are also two mannequins dressed in recreated KKK robes.

A reenactment of an interview between Calvin Craig, “grand dragon” of the Georgia Realm of the United Klans of America and the Knights of the Ku Klux Klan, his fellow Klansman George Sligh, and civil rights activist Reverend James Bevel that aired on Oct. 24, 1965 on CBC’s This Hour Has Seven Days, is played on a television. On opening night, January 16th, it was reenacted live.

Alexandria Williams, president of the York United Black Students’ Association, says when she initially heard about a KKK exhibition, she was angry that such material was allowed on campus.

“But that was before I knew the context,” she adds. “When I went in and I actually started reading about [Bowen], and looking at why she created this installation specifically on the KKK, it started to make me more interested.” She understands why an examination of the Klan was necessary.

Williams says experiencing Invisible Empires made her realize that the KKK’s time wasn’t so long ago and that society needs to be aware that racism is still happening today. “We have to continue to talk about racism that happens on campus, off campus, in Canada, anywhere,” she says.

Sam Ahmed, a fourth-year biomedical science major, said Bowen’s collection of KKK material is touchy for anyone who has experienced racism, but worth seeing. “Looking at all those petition forms it was sad to see how much one race tried preventing another from living in the same area.”

Bowen says she’d be disappointed if people weren’t upset. “It is meant to start a conversation.”

Admission to Invisible Empires is free. It runs until March 17 at the Art Gallery of York University.