Learning biz to the sound of rap

How Baba Brinkman is teaching M.B.A.s 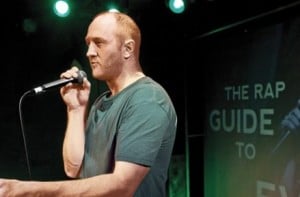 From the Maclean’s Rethink Issue. Story by Angelina Chapin.

It’s a Sunday night in Manhattan, and the only place in the world where 40 white people have their fists in the air chanting “I’m a African.” Their ringleader is performer Baba Brinkman: a tall, gangly man who is explaining to his audience in the off-Broadway theatre how the theory of evolution is captured in the lyrics of New York City-based hip-hop duo Dead Prez.

Brinkman’s riff on their song, which argues that until 60,000 years ago Homo sapiens all lived in Africa, is a part of his rap guide to evolution—the second in a series of educational rap guides he’s produced. The songs unpack such Darwinian principles as natural and sexual selection using the analogy of the rap industry: just as certain organisms are selected to survive in nature based on favourable qualities, certain rappers are selected by their audience to succeed based on talent.

In January, this caught the attention of Anat Lechner, a professor of management at New York University’s Stern School of Business. “He’s a walking example of innovation, differentiation, value-adding and the bizarre,” says Lechner. “These are exactly the things we teach business students to do.” This year, she commissioned Vancouver-raised Brinkman to make the rap guide to business, which turned out to be a collection of six songs. (“Classical economists have been hittin’ the bong / Cognitive biases are mad strong,” he raps on a track called Walk Like an Amoeba.) He performed a selection for Stern’s incoming class in August, and Lechner will use the album to illustrate principles such as risk-taking in her courses.

If it seems odds for a rapper to teach M.B.A. students, well, there’s not much about Brinkman that comes across as hip hop. Off the stage he speaks seamlessly about the relationship between technology, the decline of modern poetry and one of his favourite books, Guns, Germs, and Steel. On evolution and business: “new mutations spread through the natural world on their ability to improve the organism that carries them,” he says in a crowded SoHo café. “That’s the same with new ideas, products and services.” Not surprisingly, Brinkman describes his entry into rap as “cerebral.” “It’s not like anyone invited me,” he says. “There was no Dr. Dre reaching down from above and plucking me from the ghetto.” Not that there was any ghetto to be plucked from. Brinkman was brought up by “solidly hippie/environmental entrepreneurs” who founded one of the biggest reforestation companies in Canada (his mother, Joyce Murray, is now a Liberal MP). As a shy, white teen, Brinkman never felt comfortable in the Vancouver rap scene, but his love of medieval poetry led him to an “aha” moment: why not combine both forms to create a new niche?

In his last year of undergraduate studies at Simon Fraser University, Brinkman wrote a rap version of The Knight’s Tale for an English course. After graduating in 2003 he took his repertoire, which by then included The Miller’s Tale and The Wife of Bath’s Tale, to the Vancouver Fringe Festival. He made over $5,000 in two weeks and was approached by high school teachers to perform for their classes. He organized a tour the following year in seven cities. But shows in Brighton, Prague, Montreal and Toronto were all money losers. Fortunately, the tipping point came at the Edinburgh Fringe Festival, the world’s largest arts festival, when Scotland’s daily newspaper gave the show five stars. The entire 3½-week run sold out.

For the next three years, Britain couldn’t get enough of Baba, and he toured the rap Canterbury Tales each summer in the country, performing at high schools, colleges and music festivals. In 2007 he caught the ear of microbial genomics professor Dr. Mark Pallen at the University of Birmingham, who approached Brinkman with the idea of rapping about evolution. He performed the finished product at Darwin’s bicentennial celebration in 2009, and the next year, brought his work to an off-Broadway theatre as a four-day showcase, which led to a six-month stint that ends on Nov. 6.

The Soho Playhouse is now running his rap Canterbury Tales starting in November, and in February he will tour the rap guide to evolution to at least seven American colleges. Though he’s still not near the “future revenues of . . . well, $70 or $80 million” he raps about on his guide to business (he now makes roughly $80,000 a year), Brinkman sees rapper bravado as similar to a business plan: unrealistic expectations that get you somewhere. “I’m supposed to be millionaire by now and I’m not,” says Brinkman with a smile. “But on the other hand, if you shoot for the moon, you get pretty damn high.”