The labour minister on '80s hair and staying close to home 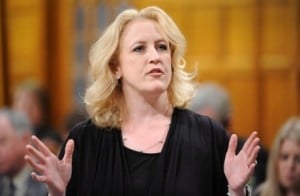 The 2013 Maclean’s University Rankings asked some of Canada’s most successful writers, politicians and scientists what they wish they’d known in university. Their answers are perfect additions to our First Year Survivor blog. Here, Minister of Labour Lisa Raitt offers her advice.

I graduated from an all-girls Catholic school and I decided to do a year—before I moved away—at University College of Cape Breton, now called CBU. At the time they were not allowed to give full science degrees in what I wanted to study, which was chemistry, so I knew I would do one or two years there then transfer.

My first year, I worked at our local Dairy Queen and I lived at home so it was very much like being in high school but the academics were a lot more difficult. One embarrassing thing: first-year university, here I’m going to be in class with boys for the first time and I get the worst haircut and perm you can imagine. It was absolutely horrendous. In the ’80s we did the perm thing and I was like Olivia Newton John on steroids. It took me a long time with that bad hair to get a boyfriend in university and I’ve been terrified of getting my hair cut ever since.

The following year I transferred to St. Francis Xavier University. Certainly going to StFX was intimidating. Even though it was only 2½ hours up the road, it was a long, long way from a place where your laundry was done for you and you had a part-time job and where you knew everybody. There were a lot more people and it was a lot more difficult balancing your academic life and social life. I think that was the first time I realized you had to find a balance of some sort and it hasn’t really stopped since then.

If you have the opportunity to stay closer to home and you think you are going to study more than one degree, you should stay local. You only get one shot at university and it is very expensive. I don’t regret staying home that first year.

I ended up getting a bachelor of science with a major in chemistry. From there, I went to the University of Guelph and got a master of science and then I went to Osgoode Hall Law School and I received a LL.B. Finally, I went to England where I studied under a Harold G. Fox scholarship with the barristers in London.

There are a lot of lawyers in government but I think I am the only one with a master’s in chemistry. I am grateful for the fact that I have a great understanding of science. I think it informs my decision-making and I really believe that it has trained my mind to think logically and that is a benefit in terms of law.

But I was not a great scientist, to be honest. You have to have a lot of drive and determination in a very narrow subject. I always liked thinking about the bigger picture.