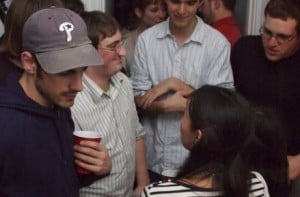 Following the St. Patrick’s Day riot near Fanshawe College, The City of London, Ont. is considering importing a U.S. bylaw that allows police to break up “nuisance parties” in private homes.

City Solicitor James Barber told Metro News he will present the case for such a law to council. College towns East Lansing, Mich., Athens, Ohio and Bowling Green, Ohio already have such laws.

The Bowling Green law was unsuccessfully challenged in court on the grounds that it inhibits free assembly, among other things. That legal question may, in fact, be the reason such bylaws aren’t already common.

Bowling Green’s regulation allows police to charge all tenants of an off-campus house where a party is occurring, should police find any of the following, according to Bowling Green State University:

disorderly conduct; illegal open container; urinating or defecating outside; illegal sale, furnishing, dispensing or consumption of intoxicating liquor (this means selling cups at kegs, supplying alcohol to underage people, etc); illegal use of a controlled substance; public indecency; littering; damage to property (if that property isn’t OWNED by you and renting doesn’t count as owning); blocking streets or sidewalks with people or vehicles (making them unusable to public or in emergency situations); excessive noise; and any conduct or condition that threatens injury, inconvenience or alarm to persons or damage to property.

Punishment includes fines of up to $210 for the first offence. The second offence, if within six months of the first, may result in a $250 fine, plus court costs, plus up to 30 days in jail. The landlord can also be charged $750 if he or she doesn’t create a “remedial plan” with a prosecutor.

Matthew Reger, Bowling Green City Prosecutor, told The Lantern student newspaper in 2009 that the law, enacted in 2005, had been used about once per week in the town of 30,000 people.

Tensions between students and non-student residents are common in university towns. In Kingston, Ont., home to Queen’s University, an off-campus security response team monitors the student ghetto and employs 10 staff to respond to complaints of student bylaw breaches 24-hours per day.