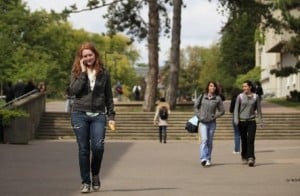 Canadian university students are generally happy with their sex lives, but women appear happier than men, and there a differences in the ways men and women label their sexual relationships.

That’s according to data from a survey of 1,500 university students aged 18 to 24 conducted by Trojan and the Sex Information and Education Council of Canada and reported on by CBC.

Seventy per cent of the female students said their last sexual partner was a spouse, fiancé or an otherwise committed romantic partner. Only sixty per cent of men said the same.

Men, meanwhile, were twice as likely (14 per cent) as women (seven per cent) to say their most recent sex was a hook-up or a one-night stand.

The sexes were equally likely to say their last partner was a “friend with benefits” (13 per cent).

Two-thirds of men and 80 per cent of women said they were happy with their sex lives overall. Alex McKay, SIECCAN’s research coordinator, told CBC that may be explained by men’s “greater propensity to assess their own happiness simply in terms of the quantity of sex they are having,” while a woman is “more likely to be looking at the quality of her relationship.”