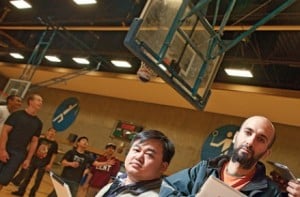 Students Alex Geoffrey Lee and Marwan Marwan in the gym at BCIT. Photo by Simon Hayter.

“I try not to get too riled up about it,” says Chris Holisky, “but it’s hard.” Indeed, Holisky has plenty of time to stew during his hour-long commute to the British Columbia Institute of Technology on Thursday mornings. The first-year computer systems technology student is required to be inside the campus gym by 8:30 a.m. sharp. His weekly rush-hour jaunt is rewarded with a 50-minute free-for-all (there’s no actual instruction) and a signature on an attendance sheet. The 36-year-old says he’d rather spend the mornings helping his girlfriend get her kids to school. But if he doesn’t get those signatures, Holisky won’t graduate. “It’s insulting,” he says.

Mandatory gym time has been part of the Burnaby polytechnic’s computer programs for several years, but students like Holisky are starting to revolt. As the only group of students on campus forced to get physical, they say the prerequisite unfairly implies they are exercise-phobic geeks.

“People have a stereotype image of a computer programmer. It’s usually a rotund guy with big thick glasses and bad shirts hunched over a computer in his parents’ basement,” says Holisky. Those people exist, he says, “but you can’t tell most of us apart from business students.” And business students, he adds, aren’t forced to take gym.

Dozens have signed their names to a petition asking that the mandatory gym class be dropped. “Students are mature adults who are in the best position to decide what is beneficial to our health and lives,” reads the petition.

Alex Geoffrey Lee represents computing students on the BCIT Student Association, and he presented the petition in his lectures and labs. Lee doesn’t fit the stereotype: he works out five times per week. Like Holisky, he takes offence at the idea that computer students are singled out. “[BCIT] has lots of people who lead the same sedentary lifestyle,” he says. “We’re the only ones targeted.”

Brian Pidcock, the associate dean in charge of computer students, says that while they are singled out, it’s for their own good. “The idea behind it is to get people out of the classroom for an hour a week,” he says. “We find, especially in computing, people tend to sit for hours and hours in front of the computer. Programming is very time-consuming, very tiring. Our intentions were good.”

He says the format offers plenty of choice. “Students can walk around the track if they want to. It’s not like we force them to play dodgeball. It’s not like high-school P.E.,” he says.

But the point could be moot. The petition has shown broad-based opposition, says Pidcock, and as a result, a curriculum committee will soon decide whether to keep the class at all. “If I had to bet,” he adds, “I’d bet they get rid of it.”

If they don’t, Holisky will have to keep doing what he does each Thursday morning—in other words, not much. “When I’m there, I do as little physical activity as possible. I’ve started taking advantage of the steam room. It’s a good way to start the day,” he says—especially after that commute.