What students are talking about today (January 21st) 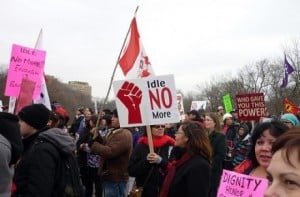 1. Student newspapers across Canada are still focused on Idle No More, having covered Aboriginal protests from coast to coast again this past week. A teach-in at Dalhousie University in solidarity with the movement drew more than 400 people, reports The Dalhousie Gazette. Guest speakers included Tayla Paul, an Aboriginal woman who told the audience about her experience being homeless. Halifax New Democrat MP Megan Leslie was there. So were many students. Some didn’t have a choice. Professor Marguerite Holland told the Gazette attendance was mandatory for her Canadian Studies class.

3. Helpful whistle-blower or security threat? The Dawson Student Union says Hamed Al-Khabaz was a whistle-blower and they’re demanding Dawswon College reinstate the computer-science student. According to the Montreal Gazette: “Al-Khabaz was expelled Nov. 14 after he blew the whistle—during a quiet meeting he held with a senior computer-operations official at Dawson College—on security flaws he’d discovered in an online database used by the school.”  The flaw allowed confidential student data to be seen by outsiders, according to a statement issued by the student union. The company that developed the software phoned Al-Khabaz’s after he accessed the system in what he says was an attempt to verify that it had been fixed, but which they call a cyber-attack.

4. Students at Western University’s have noticed a trend in computer-related design. “If you can’t stand being away from Facebook or any social network while in the shower, you can now purchase a shower curtain that can relate to you…. the Social Media Shower Curtain,” writes Naira Ahmed in the Gazette. It’s basically a giant Facebook page that can be personalize by adding a photo.

5. Today is President Barack Obama’s historic second inauguration. Students across Canada are watching on TV, including at the University of Windsor where the student union held a free event. I have to wonder whether there would be a free screening had Mitt Romney won. Remember him?