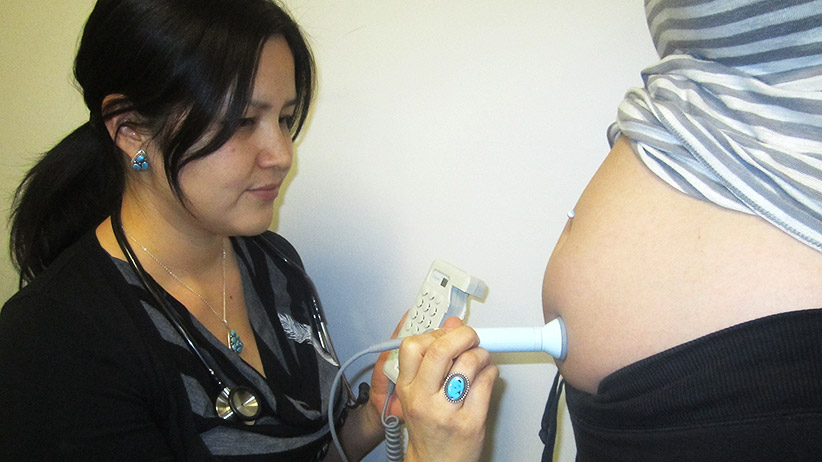 A program meant to improve the health outcomes of Aboriginal mothers and babies in northern Manitoba by training more midwives has produced only eight graduates in eight years. The province and federal government have spent roughly $8 million on the project, translating to $1 million per graduate so far.

Enrolment has now been halted until 2015.

After extensive—and expensive—consultations, the kanaci otinawawasowin bachelor of midwifery program was launched in 2006 at the University College of the North (UCN), whose main campus is in The Pas.

The program’s development was made possible by a $1.6-million grant earmarked for Aboriginals from Health Canada’s Primary Health Care Transition Fund. That funded a small staff and plenty of travel. About 150 people were bused and flown to the far North for a ceremony to honour traditional midwives and a conference to consult on curriculum. Staff and instructors also travelled to Arctic College in Rankin Inlet, Nunavut and Six Nations territory in Ontario to learn about best practices in Aboriginal education.

The program has received provincial funding of $6.3 million since 2006 (roughly $787,500 per year) and accepted 26 students over eight years. For comparison’s sake, the University of British Columbia’s four-year Bachelor of Midwifery program currently has 68 students and an annual operating budget of approximately $1.4 million.

There was a rough start for UCN’s program when an agreement with a federal hospital and a regional health authority to allow access for students to attend births took years longer than expected, leaving students without enough experience to graduate and get certified. Of nine students who started in 2006, only one finished. Four sued the university over the inability to complete the program. The university provided a confidential settlement.

In 2010, the program was mostly shipped south to Winnipeg, where it accepted a new class.

Dr. Linda Ross, director until her three-year term ends on July 31, was not available for an interview, but sent a letter to say she is proud to report that a total of eight students have graduated and are employed, or have offers from regional health authorities after they passed the Canadian midwifery registration exam. A ninth will write her exam in the fall.

As for the small number of graduates, Ross writes that the program has suffered from a lack of midwives to oversee students. “While the current graduates were students, there were approximately 40 midwives in Manitoba,” she writes. “Midwifery students, as is the case with medical students, nursing students, etc., require clinical supervision by practising midwives. Therefore, student numbers are constrained.”

A spokesperson from the ministry of Advanced Education wrote that a new program is being created by UCN and the University of Manitoba. “The two institutions are committed to working collaboratively on developing the bachelor’s program that will serve Northern and Aboriginal families drawing upon U of M’s expertise to enhance the current program. Once the new program is up and running, enrolment is expected to exceed the current 10-seat capacity.”

Melissa Brown, a recent graduate from Winnipeg who is part Ojibway and part Navajo, says she isn’t pleased the program has been halted, nor does she know why it happened. “All I heard is that UCN is a young university and needed more support,” she says. “I have just as many questions as you.”

Although Brown says the program was of high quality and the instructors worked hard to respond to students’ needs, she says there wasn’t enough traditional Aboriginal knowledge provided. She arranged for the class to meet elders and attend sun dances after her classmates (most of them non-Aboriginal) expressed interest in learning more about First Nation cultures.

Darlene Birch, a practising Aboriginal midwife who lives in Norway House, helped to apply for the initial funding and instructed students full-time in the first four years of the program. She says the program’s slow start was partly because of poor communication. She won’t comment on whether taxpayers have received value for their money. She agrees with Brown that the program has lost “basically all the Aboriginal content,” except for the short placements students took on-site with her in Norway House.

During those visits, she taught students to prepare traditional medicines and advocate for patients. Pregnant Aboriginal women often need help navigating the system, she says, whether to book ultrasounds or find emotional support in urban centres, where they are often flown near the end of their pregnancies so they can give birth in hospitals.

Birch is sitting on a committee that will try to fix the program, and she is hopeful it will get back on track, so that more Aboriginal women can receive care in the future. “There’s a tragic lack of access,” she says. “There’s three times the mortality rate for newborns [than] in any other part of Canada. You address that by putting the caregivers where they’re needed, and you want people who are culturally respectful.”