Could impact how astrophysicists work 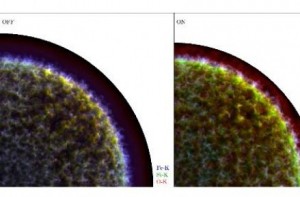 University of Manitoba astrophysicists Samar Safi-Harb and Gilles Ferrand have helped produce 3D simulations of supernova remnants (SNRs) showing the effect of particle acceleration at the wave fronts generated by these powerful X-ray sources. The U of M explains:

Safi-Harb notes: “With these simulations, we are generating the first realistic synthetic maps of projected thermal x-ray emission in young SNRs.”

They note that the results will impact on astrophysicists’ interpretations of high-resolution x-ray observations, such as those currently underway using the orbiting Chandra and XMM-Newton x-ray observatories (launched in 1999 by NASA and ESA, respectively), or those planned with Astro-H (slated for launch by JAXA in 2014).

One hundred years ago, Austrian physicist Victor Hess detected cosmic rays using a high-altitude balloon. Their origin has been a puzzle since then, but astronomers have suggested that most of these particles are accelerated by fast-moving shock waves triggered by supernova explosions. Recent x-ray and gamma-ray studies have supported this theory, but astrophysicists are not sure if protons (which make the bulk of the cosmic rays population) are also accelerated and to what energy levels. Since magnetic fields affect the flight of cosmic rays, they arrive on earth from all directions, making it difficult to determine their origin.

It is, however, possible to observe their likely sources in the galaxy: the SNRs, and look for signatures of their presence. The new simulations show how the efficient acceleration of particles at the shock affects both the shape and the level of x-ray emission from SNRs. Read more here.