What students are talking about today (February 11th) 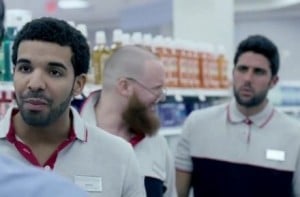 1. After Drake won the Grammy Award for Best Rap Album on Sunday night he released a video for his new single, Started From the Bottom. Much of the video was filmed at a Shoppers Drug Mart in Binbrook, Ont, according to the Hamilton Spectator, and it also features his mom standing outside his childhood home in Toronto, reports Canada.com. Why do we care? My guess is because Canadians love to see Canadian things in videos they think Americans will watch. For more Grammy coverage see Macleans.ca.

2. City of Toronto inspectors have found what they say is an illegal rooming house near U of T Scarborough and Centennial College. Officials told the Toronto Star it was probably full of foreign students. Eleven people were living in rooms in the majorly renovated house. Real estate agent Yixuan (Jessica) Wang has been accused of arranging the leases. The city says there are 120 active files stemming from complaints over suspected illegal properties in Scarborough where there is just one 765-bed student residence (at UTSC) for nearly 15,000 post-secondary students.

3. An editorial in the McGill Daily student newspaper says McGill is “too white.” It starts off like this: “In 2011, 14.2 per cent of McGill University staff self-identified as visible minorities and 23.7 per cent as ethnic minorities. Currently, there is one person of colour amongst the 25 senior administrators.” It goes on to say “students of colour [feel] isolated and under-served,” that “curricula is too focused on traditional Western thought,” and that “classrooms and conferences [are] subtly hostile and unsafe spaces.” They fail to mention that the most recent Census showed visible minorities make up 8.8 per cent of Quebec and 16.5 per cent of Montreal, suggesting McGill’s staff is almost as diverse as the city and twice as diverse as the province. They also leave out numbers on the diversity of the student population, which you’d think they might include.

4. Students at the University of Windsor likely won’t vote for their University of Windsor Students’ Alliance representatives until April because the student union broke an important policy. Meanwhile, that same UWSA’s board decided last week to request $600,000 from the capital budget to purchase the former Ali Babba’s Grill House & Eatery off campus. UWSA general manager Dale Coffin thinks that was a hasty decision. “Someone has got to stand up and say, ‘How did we go from we’re going to look into this seven days ago, to we want $600,000?’,” he told The Lance. The UWSA’s Thirsty Scholar pub shut last year after it racked up $1.2 million in debt. Mohammad Akbar, vice-president university affairs for the UWSA admits they have a “history of being terrible at running things” but he still supports the sudden purchase. “Even if it doesn’t become a pub, it’s still something that students will find very valuable,” he says. You sure about that, Akbar?

5. A new poll in Quebec—where the Maple Spring protests against a tuition increase helped topple a government—shows two-thirds of those polled want tuition fees to increase, either by the annual cost of living (50 per cent of respondents) or by more than that (17 per cent). Only 11 per cent want a freeze and just 18 per cent want no fees at all. There is a huge difference of opinion by age group. Among those aged 65 or older, 90 per cent want fees increased. Among those aged 18 to 24, 39 per cent are in favour of a freeze. This Léger Marketing poll, reported by the Montreal Gazette, sheds light on why Premier Pauline Marois isn’t ruling out cost of living indexation despite a youth wing pushing for a freeze.