An interview with the remarkable Will Guest 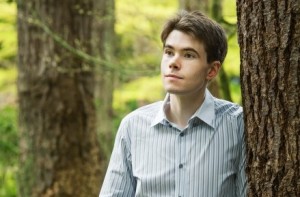 Will Guest, a 25-year-old University of British Columbia student, has earned an M.D. and a PhD and will soon patent an algorithm that could have implications for Creutzfeldt–Jakob Disease and amyotrophic lateral sclerosis (ALS). In case you’re wondering, he skipped fifth grade, finished his undergraduate at the University of Manitoba in three years and completed his combined M.D./PhD a year ahead of schedule. After just returning from a vacation in China, we spoke about his route to success, the Canadian university system and how others can succeed.

In high school, what was your typical day like?

I went to high school in Winnipeg. We were able to work independently in our math courses so we could work ahead and complete our high school curriculum as quickly as possible and then we could take AP (Advanced Placement) courses. When we’d finished the AP courses, we could go on and actually take university courses in high school through the University of Manitoba. Fortunately, it was a pretty normal schedule. I wasn’t working day and night by any means. I enjoyed it.

In university, how tightly did you pack your schedule?

It depended on the semester. Generally, I would take six courses per term. There was one term when I was taking seven courses and that was a little uncomfortably busy.

In university, did you have time for a social life and extracurriculars?

I did but to a reduced extent. Most of my social life did revolve around school one way or another but that suited me just fine. I wasn’t that involved in sports, which is something I probably did miss out on early on, not because I didn’t have the time for it, but because it was something whose importance I didn’t realize until later. I remember, really clearly, that hitting home when I was in first-year medicine sitting in a lecture on exercise physiology and learning just how important regular physical activity was. That’s when I clued in that I should pay more attention to it. Vancouver is a city where it’s very easy to be physically active whether it’s running, biking, being outdoors, hiking, skiing.

University life, for many, involves late night parties and alcohol. Did you do any of that?

The truth is, I kind of skipped that phase. When I had my eighteenth birthday party—18 is the legal drinking age in Manitoba—I got drunk that night, which is sort of customary. Other than that I was not a big late-night partier. That’s not something I ever particularly enjoyed doing.

How hard have you had to work compared to the average student?

In the 60 hours per week range in undergraduate. At UBC, the pace has been as fast or faster. In this program it does feel like you’re working two jobs, which essentially you are, because the two streams of training are relatively parallel. It would fluctuate between 50 and 70 hours per week.

Any tips for university success for an undergraduate just starting out?

Recognize that you can dedicate yourself to your studies while having fun at the same time. As much as possible, it’s good to set your goals at an earlier stage. I was looking at the M.D./PhD program when I was in between high school and university so I had a reasonably clear idea of what I wanted to do and that enabled me to work toward a specific destination and not get confused or bogged down along the way. Ultimately everything is just a matter of putting one foot in front of the other. Often, it does seem daunting and overwhelming but the answer to that is to just focus on what’s in front of you. Don’t get to alarmed by looming exams. Work on what you can do. Put it aside when you’re tired. Once you have no energy left, it’s best to relax and try again the next day.

Did you ever have so much stress from your workload that you couldn’t sleep?

The stress level was usually moderate. I, fortunately, didn’t ever have any trouble sleeping. The exception to that was when I was on clinical service. When we have our on-call shift, we spend up to 36 hours working in one go and you’re exhausted and you have to keep going.

What’s your approach to studying?

My approach to studying is sitting down and reading the textbook. Sometimes the explanations in the textbook are hard to understand at first but through perseverance and coming back to it, usually it’s the best way to study. There has been very much a movement away from using textbooks as a sort of antiquated way of doing things but my personal experience is that it really is the best way to comprehensively know a field, rather than sort of new-aged or more sophisticated ways.

What surprised you about university?

There was a certain amount of busy work that had to be done, which was a little disappointing. What comes to mind are lab reports in certain courses that were a little tedious, not very educational.

There’s a debate about the value of universities considering that Bill Gates, Mark Zuckerberg and David Karp of Tumblr all dropped out of school. Why did you stick with it?

Those are all entrepreneurs who developed a very good idea at an early stage of their career. They essentially needed to devote their full-time energies to it very early on. Ultimately, the goal of university is to train an individual to be able to do something like that. I think they were people who had already achieved what university was intended to offer them. For me it’s essentially necessary to complete the full course of training up to a PhD. That’s just the expectation. What’s more, the training environment to become a researcher is really only available in an academic setting.

As for the utility of taking university courses and then finding a job, I do think it’s a matter of the field pursued. There has been a lot of encouragement of people to go into the so-called STEM fields (Science, Technology, Engineering and Mathematics) and I think that is something really worthy. In my physics graduating class there were, unfortunately, only three of us. In general, the physical sciences suffer from a lack of student interest and I think it would be beneficial for people to be encouraged to go in those directions because that does lead to better job opportunities.

How can you make students interested in STEM fields?

I think this comes down to their high school or junior high school experiences. So often you hear people say, “I’m not any good at math” or, “I just don’t understand physics.” They’ve written off these entire fields when the reality is that, with perseverance and, particularly with a teacher who motivates or inspires an interest in the field, I think that pretty much anyone is able to understand and make progress in these fields. It’s kind of socially accepted in our society to write yourself off.

Going forward your plan is to stick with research obviously?

That’s right, as much as possible. The next thing I need to do is residency training. I’m matched to radiology at UBC so that’s what I’ll be doing the next five years. The goal of the M.D./PhD program is to train someone as a clinician-scientist so that they can be seeing patients while also having an active research interest. At this stage, I’d like to do a neuroradiology fellowship afterwards, specifically the interpretation of films of the brain and spinal cord. That’s an additional two years.

The patent-pending discovery you made, how did that come about?

That relates to one of the main areas of work in my PhD thesis which is trying to understand the process by which proteins misfold in neurodegenerative diseases. We developed a computational tool that allowed us to calculate the free energy of unfolding different regions within a protein, which is part of the process of a protein ultimately misfolding in disease. If we knew which regions would lose their structure early in the misfolding process, these were areas that could presumably be targeted by antibodies that could ultimately recognize the confirmation of the misfolded protein over the folded confirmation. I came from more of a computational background so I was more familiar with the modelling necessary to develop this into a more general computational prediction tool.

Do you think Massive Open Online Courses will lead to the downfall of residential universities?

I could see that, at some time in the future, online universities could play a pretty substantial role in our university system. But, by and large, I think the Canadian university system delivers excellent value for money and there are really few barriers for people who want to pursue post-secondary education. I think in Canada the current system will remain dominant for quite some time. I can understand why, in other countries where the cost of education is much higher than it is in Canada, those emerging potentially disruptive technologies will play more of a role early on. But who knows?