Men only on Halifax "Women's Wall of Honour" billboard

Adweek calls it "fail of the day" 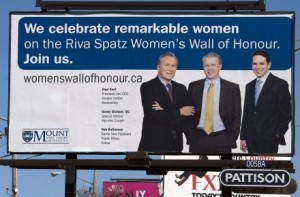 As billboards go, it’s as bland as they come, featuring only a few lines of text and a photo of three guys in suits.

It’s what the billboard on a major commuter route in Halifax doesn’t show that has some people so riled up.

The advertisement on Barrington Street is for Mount Saint Vincent University’s bid to raise money for its Women’s Wall of Honour, to be erected outside a new research building by December 2014.

The absence of women in the ad has prompted a spirited debate in social media circles and criticism from abroad.

A website headline from New York-based Adweek magazine reads: “Idiotic billboard celebrating women shows three grinning dudes in suits.” The website goes on to describe the advertisement as the “billboard fail of the day.”

The websites Gawker and Buzzfeed also picked up on the story, adding their own witty rejoinders. “Maybe the women are on the back,” Buzzfeed mused.

The billboard, erected about a week ago, shows Peter Kent, president of the Greater Halifax Partnership, former provincial Liberal leader Danny Graham and Rob Batherson, a vice-president with the ad firm Colour.

Above the photo is the message: “We celebrate the remarkable women on the Riva Spatz Women’s Wall of Honour. Join us.”

Batherson said one of the goals of the campaign is to get more men to contribute. The cost of having a woman’s name inscribed on the wall is $1,200.

“The lesson here is how quickly people can jump to conclusions without doing their homework,” Batherson said in an interview Thursday.

“(Adweek) is entitled to their opinion but it’s been great to have the discussion about how to get more men to contribute to a women’s wall of honour. … It’s a lot easier to take shots than to be helpful and constructive.”

University spokeswoman Kelly Gallant said the billboard is part of a larger print and online campaign that also features images of prominent women.

When asked about the negative attention the university is getting, Gallant said the intention of the campaign was to generate discussion and awareness.

“It’s doing that,” she said, adding that it was a team of three or four women who came up with the concepts for the campaign.

However, Gallant hesitated when asked if the university would have done things differently had it known a backlash was coming.

“That’s a tough kind of hypothetical question,” she said. “I think our efforts are focused on ensuring people understand the campaign. There’s been commentary and questions, but there’s also been a lot of positive feedback as well.”

On Twitter, reaction kept rolling in days after the billboard first made the news.

“Let’s support women by having big-wig male leaders on our billboards. #not,” wrote one wry observer.

Others were more blunt: “That MSVU billboard that’s in the news is TERRIBLE design and I want to smack whoever decided it’d be a good idea. Stupid people.”

But there were supporters who said the provocative ad was a winner.

The 140-year-old university, which has 4,000 full- and part-time students, once only admitted women.